You are here: Home / Archives for Vintage Pendleton Cardigan

Ben and I were together for nine years before we had Nora. We spent much of that time watching The Big Lebowski.

Right now, you’re either thinking “Cool! I love that movie,” or “Huh?  Why?”  It’s the kind of movie you either love or couldn’t care less about.

If you’ve never seen the movie, the only thing you know to read this post and make any sense of it is that the main character, played by Jeff Bridges, calls himself “Dude,” and is a complete lazy ass who gets sucked into a complicated kidnapping scenario.  Through much of the movie, he looks like this: 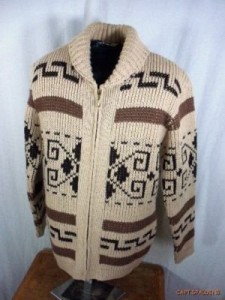 Well, this year is our 10th wedding anniversary*.  I told Ben I’d make him a sweater for the occasion.  I set him down with his laptop at the Ravelry website and made him look through hundreds of sweaters to find the one he wanted.  He literally gasped when he found this one. The search was over.   I would be making the Dude’s sweater.  It’s a reproduction of the Pendleton Cowichan Cardigan that was made in the 60s and 70s.  These things sell on Ebay for hundreds of dollars, thanks to the popularity of the film.

Thankfully, some crazy beautiful knitter named Andrea Rangel wrote a pattern and offered it for free.

So, that’s how I’ll be spending my weekends until the big day on July 14th.  And this is the song that will be going through my head….

*For those of you doing the realtionship math, we’ve been together 13 years, but married for 10.  Thus 13-4=9 years before we had Nora.