You are here: Home / Archives for portland

Last summer, I fell in love with middle grade novels. First it was The Penderwicks series. Then Harriet the Spy. Then Charlotte’s Web, then The Lion the Witch and the Wardrobe, then Harry Potter. And on and on.

And I couldn’t have done it without Nora. She was my tiny project manager. I’d write a few hundred words and read it back to her. “That’s so great, Mommy! Write some more!”

Did I mention one of my main characters is a ten-year-old girl with, ahem, leadership skills?

All these years I’ve tried to find time for writing while parenting. Turns out all I needed to do was write something my daughter wanted to read!

Now it’s seven months and many revisions later. The novel is in its final draft (I hope).

While I wait, I thought I’d give you guys a peek at it and the chance to get an email notification when it’s published.

Click here to get a taste of the book, tentatively titled Martha and the Boys. If it sounds like something you and your kids would like to read, enter your email address to read the entire first chapter and get notified when it’s published.

Good news, friends!  I managed to snag a gig as a result of attending BlogHer. Please head over and check out my piece, How to Succeed in Portland Without Really Recycling at BlogHer.com.

And I’d so appreciated if you’d hit the “sparkle” button while you’re there, so maybe they’ll invite me back sometime. I only have to manage 16 more of these babies for the conference to pay for itself!

When you’re done reading that, come back and read my father-in-law’s rebuttal, of sorts.  But really, go read my piece at BlogHer.com first or what Larry has to say won’t make any sense. Take it away, Larry…

I loved your description of success in Portland. Perfect. And funny.

You know, here in the Midwest some of us have a similar lifestyle. But we don’t make a big deal out of it like you Portlandiacs. We just modestly go about our business.

Yes, we live in the suburbs and have a too-big chemically-infused lawn. But we also compost — it’s right behind the shed where the neighbors won’t see it. Nobody knows. And that is just fine, because we are from the Midwest, you know.

When Ben and Iss were babies we used cloth diapers. You haven’t had fun until you dunk diapers in the toilet umpteen times a day, doing your best to not splash. Or gag. The diaper pail was in the hall closet, of all places. No one knew it was there, of course, because Midwesterners don’t make a show about such things.

As you know, we have been vegetarians for more than 30 years. I suspect that on some days we have been more vegan than not. Our friends eat meat, but what other people choose to eat is no business of ours. Eat meat if you wish. We wouldn’t want to impose our values on other folks. Midwesterners would never do such a thing, you know.

We recycle as best we can, checking the little number in the middle of the triangle. Part of it is about frugality. But the rest is just doing what it takes to make the world a bit better, as modestly as we can. After recycling and composting, there isn’t much left. When it comes to trash, we make a game out if. How many weeks can we go without putting any trash out by the curb? But we would never expect the neighbors to notice. Or care. Not in the Midwest.

We use paper napkins? Gasp! But after each meal we slip them under the placemat to be reused again and again. If we haven’t been eating too many meals with ketchup or other goopy stuff, a napkin can last a week or more. Then it gets composted. But here in the Midwest, we do it quietly and modestly.

Maybe it’s not so much what we do, as how we do it. Portlandiacs, get over yourselves! Be like us here in the Midwest. As Garrison Keillor says, “Be well, do good work…” and don’t make a big deal out of it. 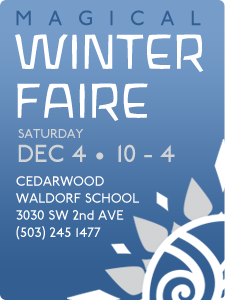