You are here: Home / Archives for kindergarten 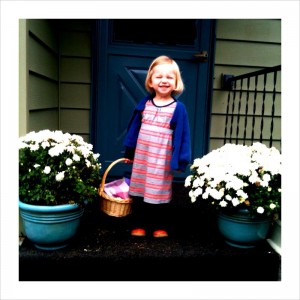 It’s two days until Nora starts school.  I’m off work this week, pretending to be a stay at home mom.  I like it, obviously.

I wanted Nora to have some transition time between schools.  The idea of sending her to preschool one day and kindergarten the next seemed callous.

So we’ve been running errands, collecting the last few items on her supply list.  Yesterday we went to a kid/parent yoga class, where she got knocked down twice by rambunctious seven-year-old boys without shirts.  It was good practice in getting back up.  She was clearly impressed with their boisterousness and even took her shirt off to match.  (No, I didn’t stop her, it was hot and she’s three.) We’re also building a raised bed for the garden and picking out a paint color for the bathroom.

We’re sewing some wild oats as well.  Since nail polish and temporary tattoos are verboten at Waldorf school, she has her finger and toenails painted, and sports a horse and a cow tattoo on her belly and a unicorn on her forearm.  Wednesday night we will cermoniously remove them at bathtime.

We plan to spend the next two days doing fun things, but in the back of my mind, there’s a desire to keep her from harm long enough to get through the first day of school without illness or injury.  She’s getting over a cold; her nose needs to stop running so she doesn’t get sent home on Thursday, and I need to make sure she doesn’t break any little bones.  This is causing a few inhibitions when it comes to selecting activities.  Swimming?  What if she slips on wet floor and goes to school with a big bruise on her forehead?  Preschool carnival rides at Oaks Park?  What if she picks up a new virus or gets hurt on a ride?

I’m not normally like this, but something about a big milestone makes me cautious.  I don’t want to blow it for her.  But, of course, I don’t want her few days at home filled with banal trips to the grocery store and home depot.

Nora needs to practice getting up when bigger kids knock her down, and I need to practice letting her fall.

Being early gave us a few minutes to chat with Nora’s new teacher, Miss E.  While Nora was off playing, we talked about Nora being the youngest and the smallest in the mixed age kindergarden class and the best way to approach that.  I said we had almost no reservations, after talking to Nora’s current teacher about it.  Miss E. said that Nora’s teacher had written a beautiful letter for Nora’s admission application (he mailed it directly, so we didn’t get to see it.)  Again, I felt so thankful that Nora has had such a terrific teacher for a year and a half now.

Slowly, other families began to arrive.  The oldest boy in the class is approximately eight times larger than Nora.  She quickly made him her pawn by asking him to push her (very fast) on the merry-go-round.  The mother of this boy reassured me about the aftercare program.  She had many opportunities to observe the aftercare group on the playground after school.  She said the kids were always excited to go to aftercare and were happy and content on the playground.

The kids were mixing nicely, some on the play structure, some running about with sticks, but it was time to haul them in to eat.

First, all the familes formed a large circle to hold hands and say a blessing.  I tried to manuever my socially phobic husband between Nora and me, but he ended up holding hands me and another dad.  Later, in the car, he said he was scared he’d accidentally squeeze the guy’s hand when he meant to squeeze mine.  This gave me the giggles.

The food was exactly what you’d expect to find at a Waldorf potluck.  There were bean croquettes, veggie trays, goat cheese, rice and bean salads and apple cider.  And some killer mac-n-cheese.  I need to find out who made that mac-n-cheese.  I didn’t see any meat, I’m sure everyone was being conscious of the fact that many of the families would be vegetarian.  We are not vegetarians, but I brought a quinoa tabbouleh with pistachios that’s my new favorite recipe.

Everyone brought blankets to sit on.  Nora thought this was silly and chose to sit at the picnic table by herself and quickly commandeered a bag of tortilla chips as her own.

We struck up a conversation with the family next to us.  I asked how long their oldest child, a third grader, had been attending (many families send their kids their for early childhood programs and a few years of kindergarten).  The father joked that in the car on the way over, they had been discussing the possibility of parents estimating length of attendance by the amount of tuition they’d paid.  When asked how long your child had attended, you could reply, “Long enough to spend $54,000.”  We all laughed freely at this — in the way you laugh at an uncomfortable truth with someone who completely understands.

After a leisurely meal, we decided to pack up and head home before a meltdown, as we were already a half hour past bedtime.  Though Nora was thoroughly enjoying herself, we managed to get her back to the car without a tantrum.

Ben was tired, Nora was getting there, and I was giddy.  Great people, healthy food, a beautiful setting.  It’s a great start.