You are here: Home / Archives for face painting

I did an article for Metro Parent magazine’s December issue on how local families make holidays special and meaningful.  And I almost bit through my bottom lip that I couldn’t share personal anecdotes for the piece. Good thing I have my own blog.

On the Campbell side, there is a tradition to exchange “table gifts.” On labor day, every family member draws a name, then each person makes a gift for whoever they drew.  We open the gifts at the table during Christmas dinner.

This year, I drew Debbie, my mother-in-law.

I don’t know if I’ve ever mentioned it here, but my in-laws are locked in an epic battle with the squirrels in their yard.  They call them “diablo” squirrels. Apparently squirrels dig holes in the lawn and ruin it. I never noticed, probably because my lawn is never nice enough to ruin.  Or maybe the dog is pooping in the holes, thereby covering them up. Anyhoo, Larry and Debbie set live traps for those cute little critters (L & D are vegetarians, so killing them is not an option) and relocate them across the river. Ben and I think this battle is sort of funny and, um, futile.  So, for Debbie’s table gift, I was able to do something really nice and yet mock her at the same time.  I made her these:

Ben drew my name. While I was inside by the fire knitting squirrel mittens, Ben was out in his shop with the oxyacetylene torch making me this:

My mind was thoroughly blown. Ben has never worked with stained glass before, much less with braising brass fittings to create a screw top and bottom to insert the candle. And, he knows me well enough to use the lead-free sauter — one wouldn’t want to poison oneself or family, now would one?

Nora made a vintage inspired Christmas ornament for her great-grandpa (she calls him Great Papa), and got a perfectly girly hand painted jewelry case from her Aunt.

Then we ate a scrumptious dinner cooked by Debbie and my sister-in-law Elizabeth. That’s right, I didn’t have to cook. And I even remembered to help clean up afterwards instead of just rushing for the gift pile.

On the Burdick side,  I was a little worried about my nephews being able to warm up to me in a hurry since they only see me twice a year.  So I bought a face painting kit complete with a book of how-to diagrams for the artistically impaired (me) and pulled it out of my bag as soon as we got there. My nephew, Sameer, who’s Nora’s age, got to choose whatever he wanted from the book and I got to hold his sweet face in my hands while he held still.

I also painted a monkey with its tail curled around my mom’s arm, but forgot to snap a picture of it. Eventually, the kids seized the paint tray and started painting one another’s legs. Then the grown kids got down to playing some Beatles Rockband on the Xbox. This is the only thing we have that resembles a tradition as we’ve done it three years in a row. This year, however, someone was smart enough to hide the microphone from me.  And we made a whole mess of tamales for Christmas dinner.

All-in-all, I couldn’t have asked for a better or more memorable holiday.

Multnomah County is the most urban county in the state of Oregon, home to the largest city, Portland.  Which translates to a pretty thin county fair.  Lots of vendor booths, not enough fried foods, no big animal barns, not a 4-H kid in sight.

On Sunday, with the end of vacation looming, I dragged Nora to this fair, conveniently located about two miles from our house.  It was great — I now like small county fairs better than large ones.  They are more kid-sized.  You don’t have to drag your toddler across acres and acres to see the attractions and the lines move quickly.

Our first stop was the generic version of Dock Dogs.  Nora watched various pooches launch themselves into a large pool, in pursuit of floaty toys.  Van Halen was blaring over a loudspeaker.

Next, we made our way to the main attractions.   We marched through the small petting zoo.  White rabbits, mini-cows, goats, a donkey and a few alpaca.  As we washed our hands, I heard someone ask for a pony ride ticket.  Hello.  Pony ride?  Make my little girl’s dream come true?  Here’s five dollars.

We stood in line and Nora decided she wanted to ride the biggest pony.  I explained that we probably would not get to choose and reminded her of our mantra, “You get what you get and you don’t throw a fit.”  As luck would have it, she got her pick and the pony seemed grateful for my thirty pound daughter after the chubby 4th grader who had just dismounted. 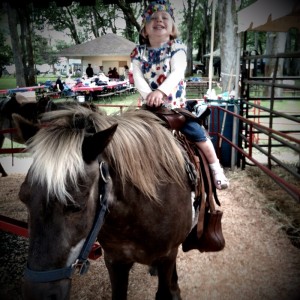 The ponies were tied to a merry-go-round like contraption.  Big kids rode by themselves, parents walked next to the smaller kids.  Halfway though the ride, Nora tried to shoo me off.  We compromised.  I could walk next to her, but was not to touch her.  She was fantastic and took it all very seriously.  The attendant even commented on what a great job she did (another advantage to having a child who’s small for her age — people are always impressed because they think she’s younger than she is).

Next was the corn box.  Think sandbox, but filled with corn kernels.  Being the most tactile kid on earth, she swam in it — she luxuriated.   After twenty minutes I had to lure her away with promises of face painting.

Can I just say I was having the time of my life fulfilling every desire a child could have at a fair?  I remember begging for face painting and pony rides as a kid, and I remember hearing “no” more often than “yes.”

The face painting of today is to the face painting of my childhood what an iPhone is to a brick cell phone from the eighties.  There were little girls prancing around with crowns painted on their foreheads complete with fake jewels glued to their skin.   There were boys with their entire faces painted like tigers and goblins.  When I was a kid your choices were a big flower, a bundle of three balloons or a rainbow with a cloud at the end.  Period.  The booth had a large poster of choices and a pricing scheme.  If we were going to buy groceries this week, I needed to steer her toward the pictures framed in white ($3) or red ($5).  First she wanted this floral, mystical thingy that snaked from the forehead, to the temple and onto the cheek. Then she changed her mind and wanted Hello Kitty.  Then a heart.  Finally, she settled on a kitty cat muzzle.  She sat very still during the process and was clearly delighted with the result.  She looked in the mirror for ages.  It took a magic show to pull her away.

Have you ever been to a magic show where the magician had a meltdown?  It’s pretty extraordinary.  We sat on haystacks and watched a sweaty magician lose it.  Though he touted his show as being close to a Las Vegas-style Grand Illusion, I can’t remember seeing a magic show more transparent.  Seriously, I saw a ten-year-old with a card table set up outside his parent’s garage sale who was more impressive.  Still, the kids were enjoying it, and there was an eight-year-old girl named Kaitlyn who volunteered to float in space “light as a feather, stiff as a board” style — she was dynamite.  Shortly after Kaitlyn left the stage, the magician started sweating even more profusely.  He was changing the music at his boombox when he started rubbing his thighs, bouncing up and down, and wincing.  “Folks, we’re going to have to take a five minute break.  My legs are cramping up and I can’t really walk.”

Of course, it’s a magic show.  My first thought was that this was part of a gag.  Not so.  This fool had an honest-to-goodness electrolyte deficiency.  Here’s the amazing part: instead of limping backstage to freak out in private, he sits down on stage and talks about how he should have known better than to take the winter off and then start his season with a county fair.  Apparently, being a local magician requires considerable conditioning.  The woman next to me asked if there was a doctor in the house.  The magician declined.

“I’m dehydrated,” he explained.  His assistant handed him a bottle of Gatorade.

With that, I took Nora’s hand and led her away.  She didn’t need to see the poor guy humiliate himself any further.  Of course, I felt badly for him, but I was also strangely giddy seeing the facade drop away during a Grand Illusion.  I guess Vegas can rest easy for the time being.

On the way out, I bought a big bag of kettle corn to cap things off.  Nora and I walked back to our great parking spot, hopped in the car and sped away.   She was anxious to show her daddy her kitty cat muzzle. 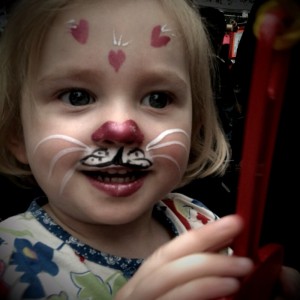