About two hours after delivery, we were moved upstairs to a new room.  The sun was shining again and we had a view of the enormous hospital.  I felt like we were in some super-high tech fortified city, which I guess we sort of were.

Because of the large dose of whatever it is they use for an epidural, my left side was still completely numb.  I was exhausted from being awake and in labor all night, yet euphoric that our daughter was in my arms.  I slept for a bit and when I awoke we met our new nurse, Florence.  She was from Jamaica and had that lovely patois.  She assured us that Nora was an uncommonly beautiful baby, which we had no trouble believing. 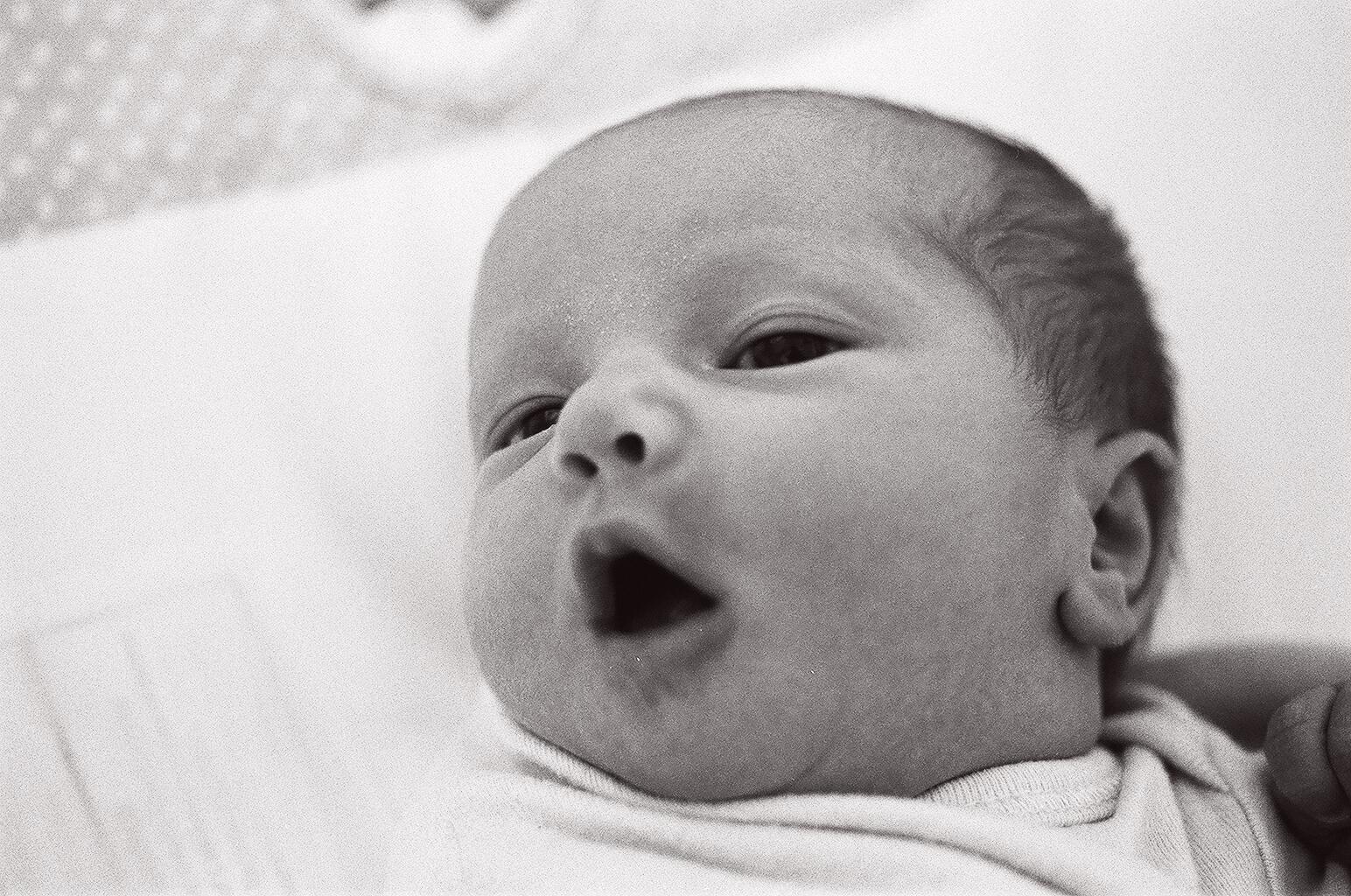 My first trip to the bathroom and back left me sobbing. I was shocked at the level of pain I felt —  I could barely walk.  Florence seemed surprised at my tears.  Drugs were delivered.  Ben accompanied Nora down the hall for some tests while I had a chance to rest.  When they returned, attempts at breast-feeding were made without much success.  I revolted against Florence when she told me that they’d have to give Nora some formula.  As I had gestational diabetes, they were checking Nora’s blood glucose level and it was too low.  She needed sustenance right away.  I was worried that bottle feeding would forever ruin our chances to breastfeed successfully.  There were more tears, but  I lost the battle.  Again, Florence seemed as if she couldn’t understand my reaction.  Bottles and formula were brought in.  And a breast pump.   I was assured I would get to see a lactation specialist before the end of my stay. 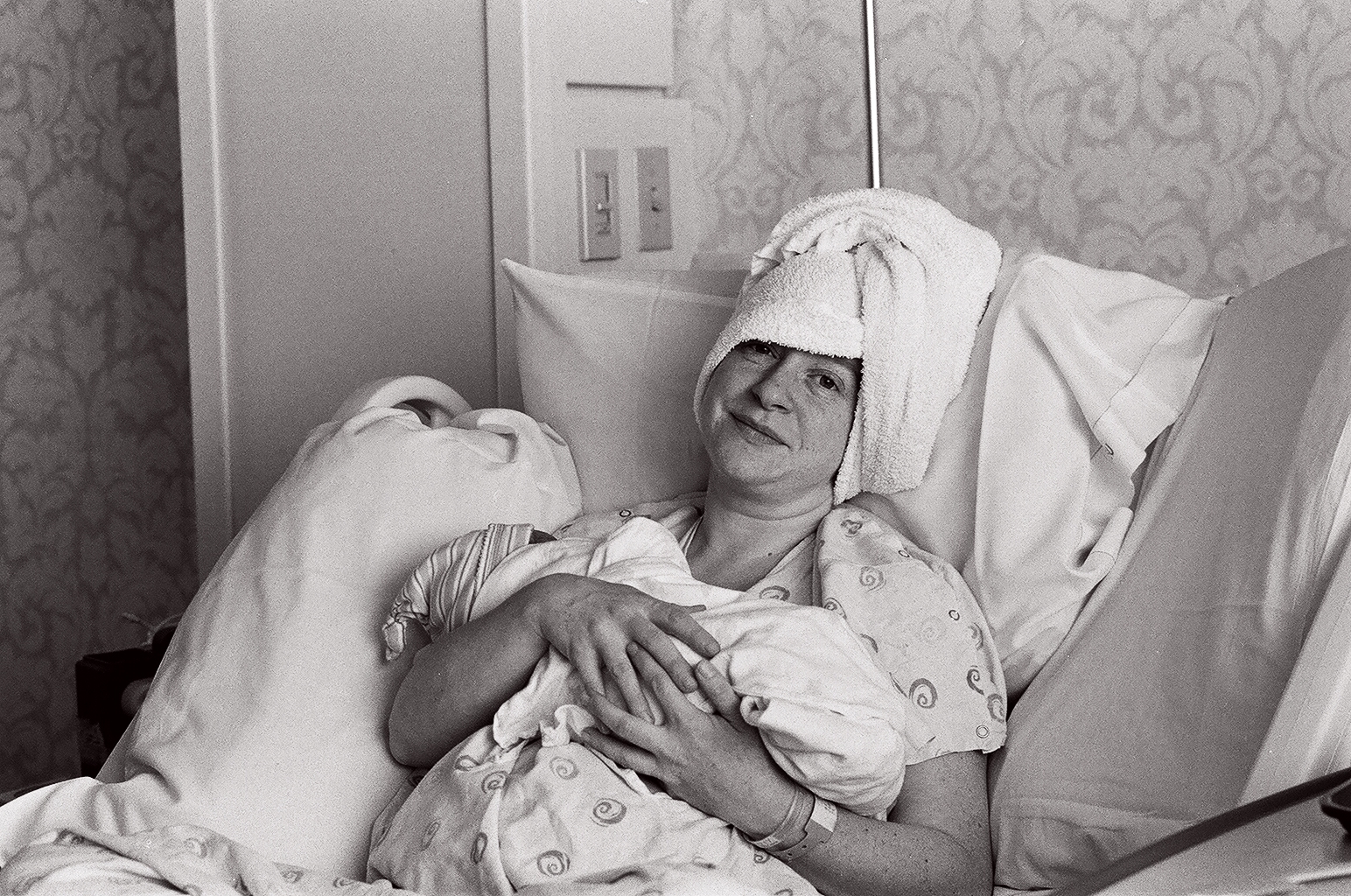 After the formula kerfuffle, Florence and I never really hit it off.  But the rest of the staff was terrific.   There was a nurse’s aide who was an immigrant from Russia. She was very gentle and attentive.  Our night nurse was fantastic (memory fails to come up with her name — Loretta?).  She was calm, practical and empathetic.  She helped us break the rule against having your baby sleep in bed with you.  I so wished she could be my day nurse. 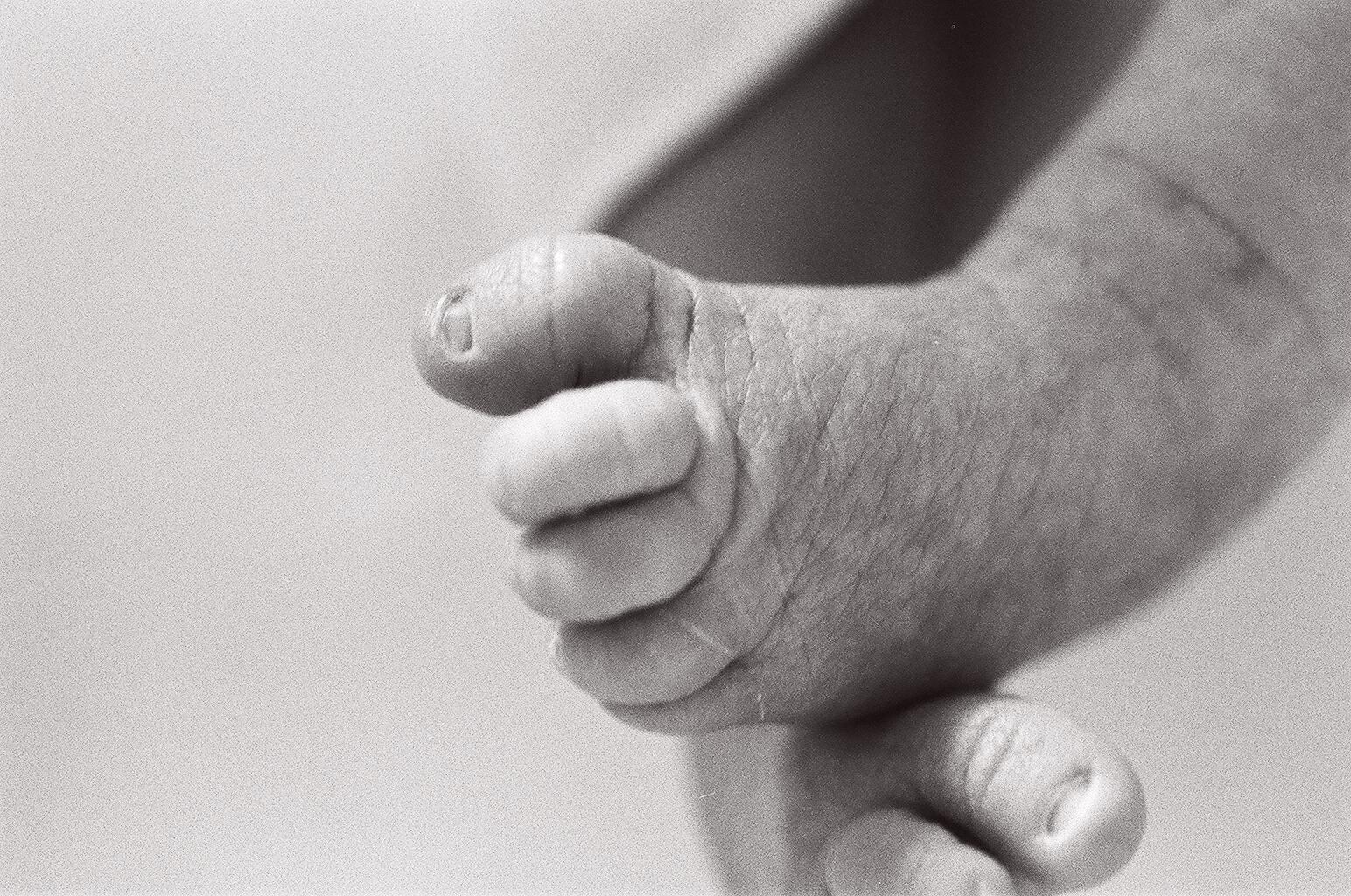 My fondest memories in the hospital are the looks and amazement that Ben and I shared.  We were both so flabbergasted by the creature that was now in our charge.  Our eyes may have been red-rimmed from sleep deprivation, but we were living inside a perfect dream.  A healthy little girl in our arms.

Then there was the little problem of having two cars at the hospital — remember, I drove myself in for what I thought was a doctor’s appointment.  Ben’s plan was to drive his car home and ride his bike back to the hospital.  Then we’d take his bike home on the roof rack when it was time to go.  Great plan, except the poor guy suffered a flat tire on his way back.  He had to call a friend from work to give him and his bike a lift. 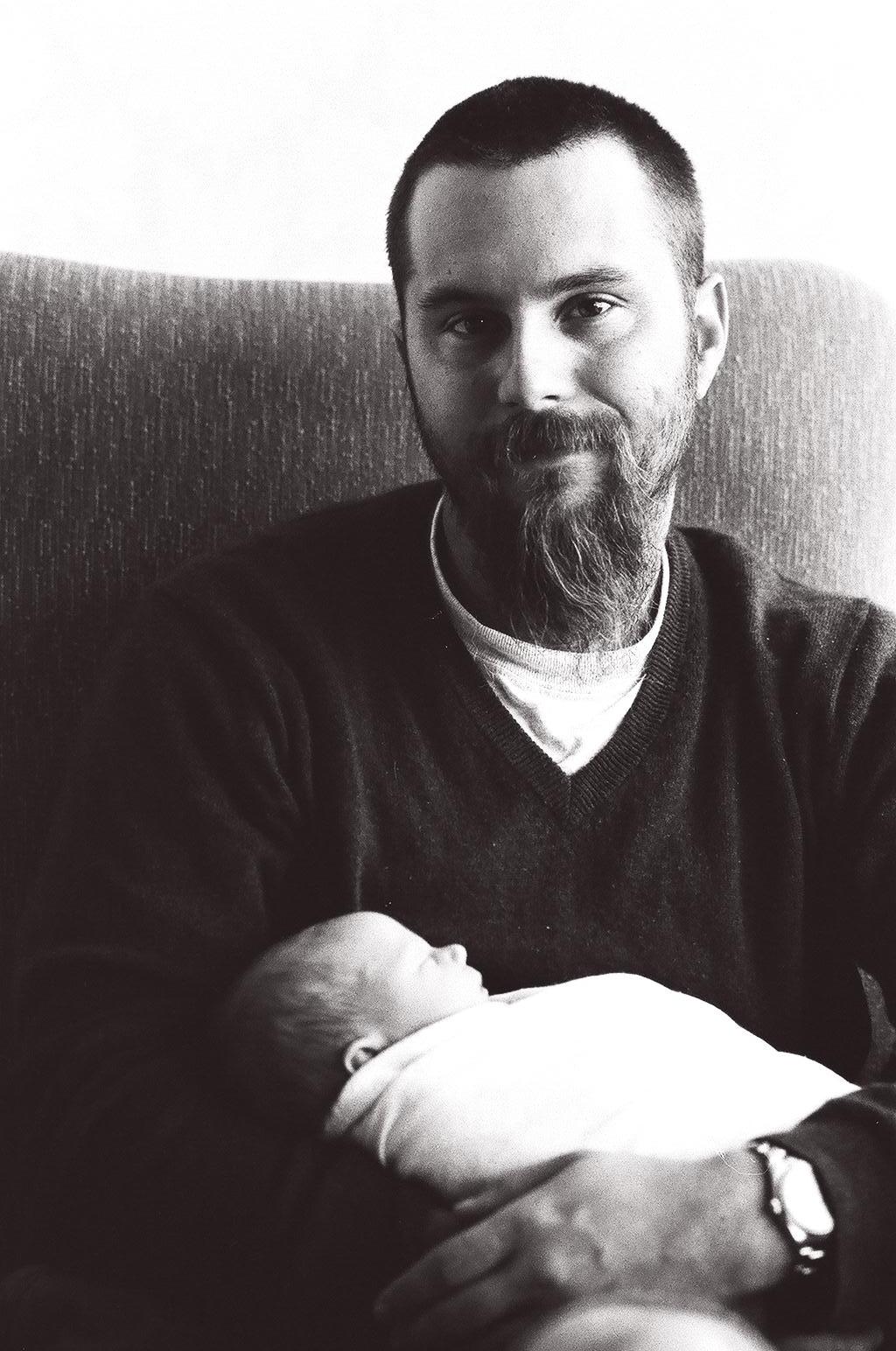 When it was time to go, we were ready.   My doctor (the one who couldn’t deliver my baby because he was too tired) stopped in to see us just as we were leaving.  I was nervous about the car ride and Nora was fussy.  I remember trying to get her to take a pacifier and wanting the doctor to leave so we could get home.

I sat in the back seat with Nora while Ben drove about twenty miles an hour all the way home — we were so nervous about our precious cargo.  I was acting as a second set of restraints, holding her head steady during turns.  And then we were home. 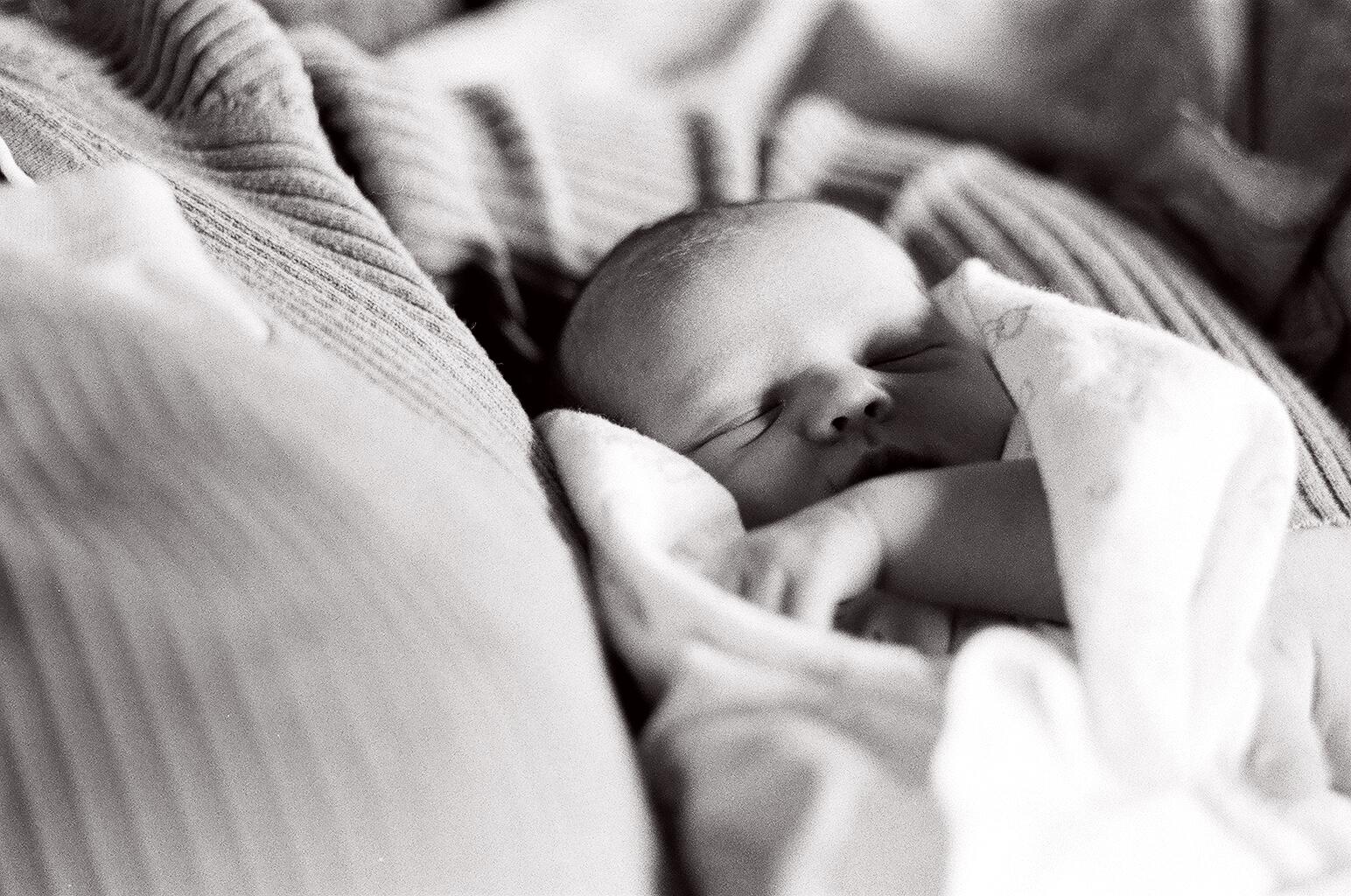 We were ready to collapse from the drain of the eight mile journey from the hospital to the house, but there were things to be done.  Poor Ben had to do the hard stuff, like collecting our dog from boarding and getting my prescriptions filled.  He actually fell asleep in the waiting room chair of the Safeway pharmacy.

We had been a touch anxious about introducing our 55 pound dog, Hoover, to a tiny infant.  The initial introduction was a non-event, Hoover was so exhausted from three days of romping with other dogs that he failed to even notice her.  After sleeping for a few days, he gave her a sniff and decided she was his personal responsibility.  When she would cry, he would come running and stare at us as if to say, shouldn’t you be doing something to make her stop? Do you even know what you’re doing? 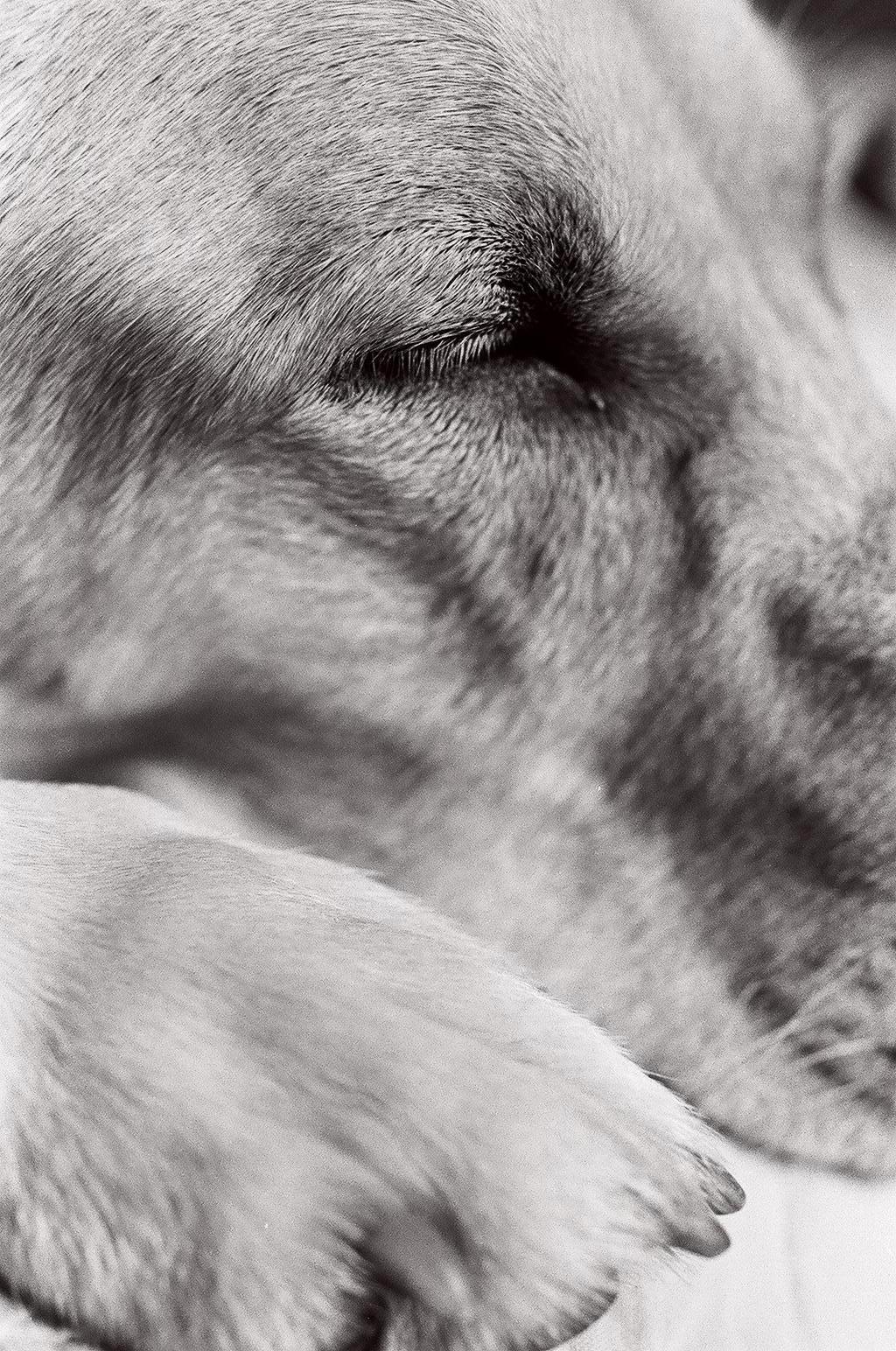 My mom had warned us that the first few weeks with a newborn are “no joke.”  We quickly realized we needed a baby swing.  Ben came back from Babies-R-Us with the most deluxe model and an observation that there are two types of people who shop at baby big box stores, the still pregnant and carefully deliberating and the bleary eyed new parents who will pay any price to meet a need.

We decided that the best approach for the first few days was to work in shifts.  I would tend Nora for four hours, while Ben slept in the bedroom with earplugs and the fan going, then we’d switch.  During one of my shifts, I was so wrecked with exhaustion, that I started to hear the voices of my aunts in the white noise playing from the swing. 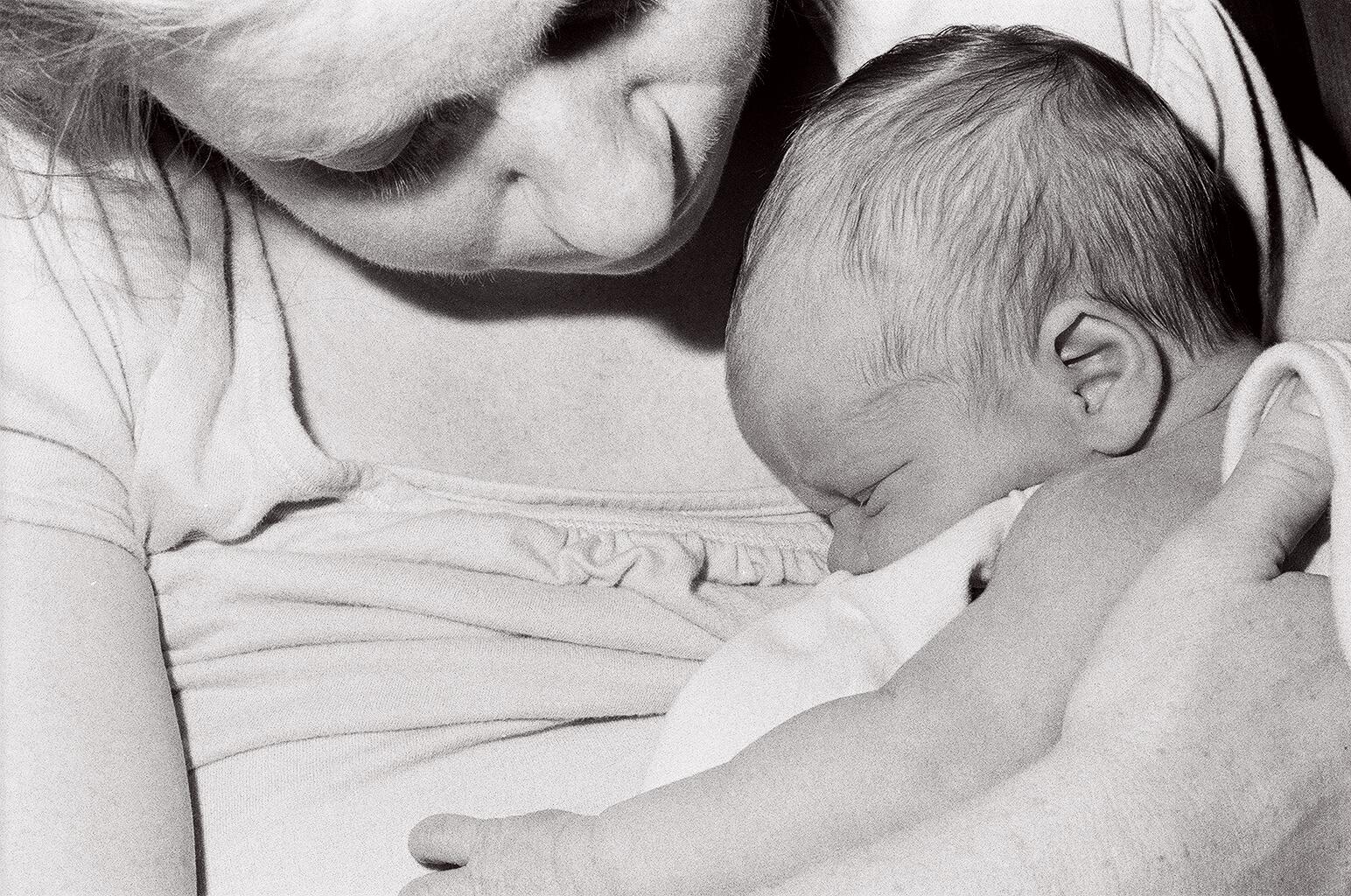 Breast-feeding was going better.  We had a love seat set up in Nora’s bedroom.  I’d snuggle up with her and stare out the window during feedings.  The second evening we were home, I was feeding her and she started making a pronounced gulping sound.  My milk had come in.

Nora had jaundice.  Over the weekend, I spoken to the doctor on call at our clinic.  He had a thick Indian accent and advised us to “strip the baby naked” and get her some sun exposure at the window.  Ben and I had fun repeating “streep the beh-bee neked,” to each other.

On Monday, we took her in for her first check-up.  Nora was dressed in a onesy that her aunt Iss had made for her.  It said “Baby Campbell” across the front.  Our troll-like nurse’s aide asked, “Is that the child’s name?”  Then proceeded to poke and squeeze our poor girl’s feet over and over again to get a blood sample.  Later that day, we got a panicked call from the clinic, her bilirubin came back sky-high and they wanted us to go the emergency room right away for another test.  Hormones still raging, I had a complete melt-down over the thought of anything being wrong with her.  Ben had to give me a “pull it together for your daughter speech.”  We headed back up to the hospital on the hill.

During the admissions process, we undressed her and put her on the scale.  Ben told the nurse about getting her undressed for the first time and how he tried to simply yank her shirt up over her head, “you know, like she was ten.” 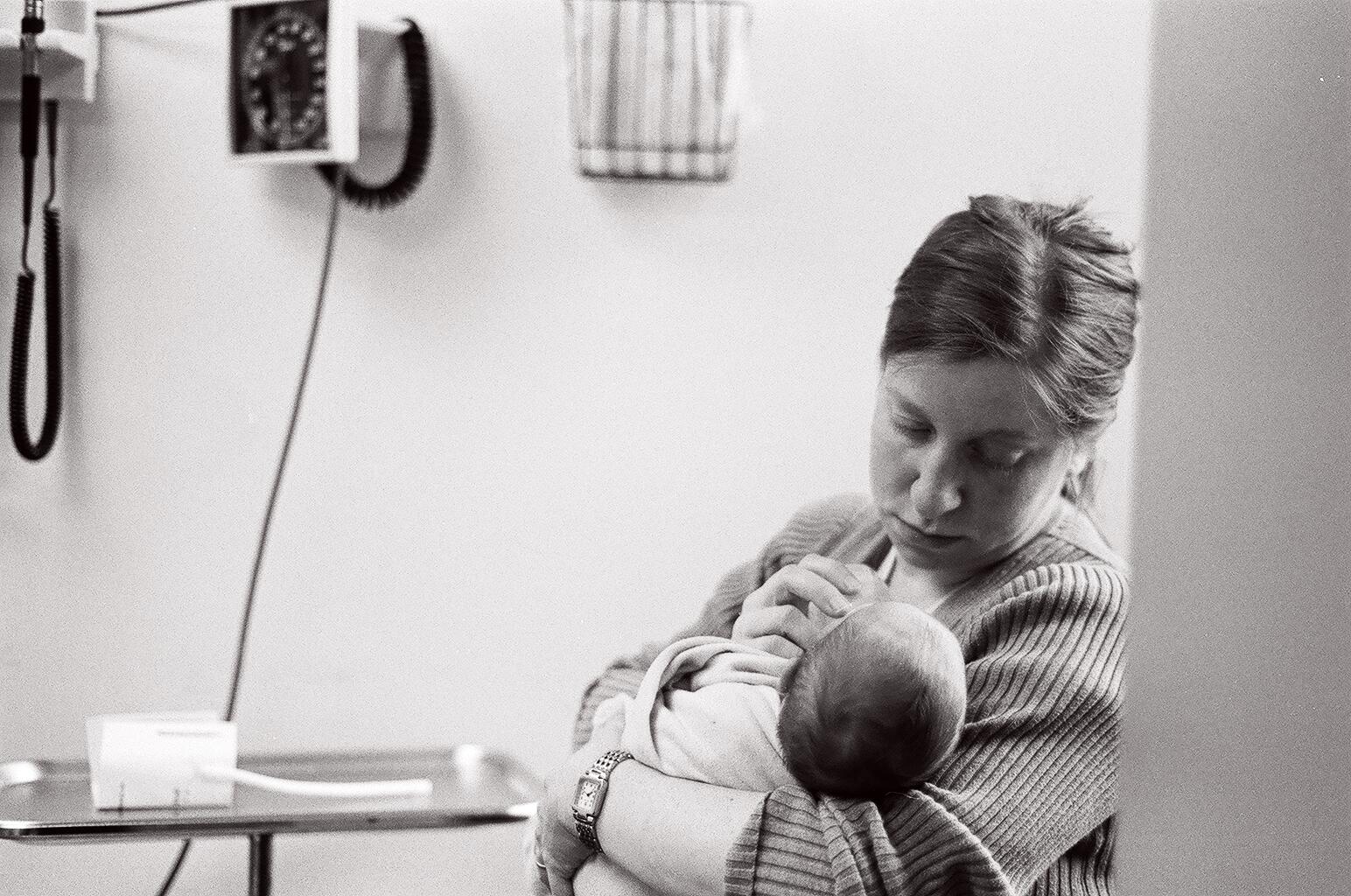 Nora needed another blood draw to test her bilirubin level.  We were loath to have her tiny feet poked again.  OHSU has a terrific pediatric ER, they offered to get the sample from her scalp.  They were a bit surprised when I enthusiastically agreed to it.  Apparently, most parents are not eager to see a needle stuck in their child’s head.  It made far more sense to me to let them find a good vein in her head, and get it over with, than to keep torturing her feet.

The test came back high, but not as high as the previous test, which was probably a false result.  The doctor explained our options while diapering Nora for us.  Since she was born a few weeks early, we could admit her to treat the jaundice.  Or, he could send us home and get a light blanket ordered for us, with home visits from a nurse.  We all agreed to the latter strategy. 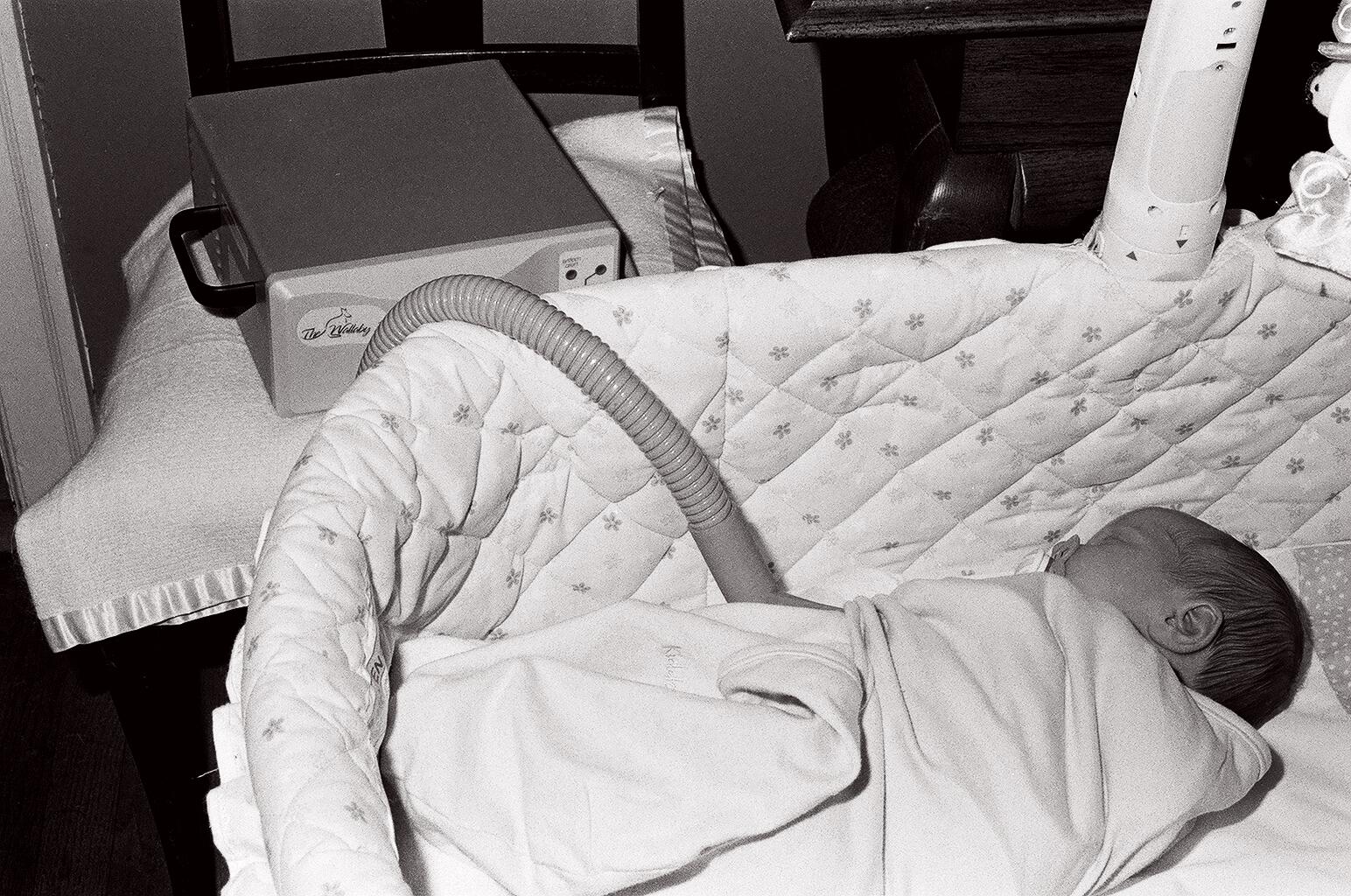 The light blanket was delivered and after a few days of being wrapped up and looking like a glowworm, Nora’s bilirubin dropped to a normal level.  With this (non)crisis behind us, we soon fell into a family rhythm.  Feed, cuddle, diaper, cuddle, bathe, cuddle.  Repeat. 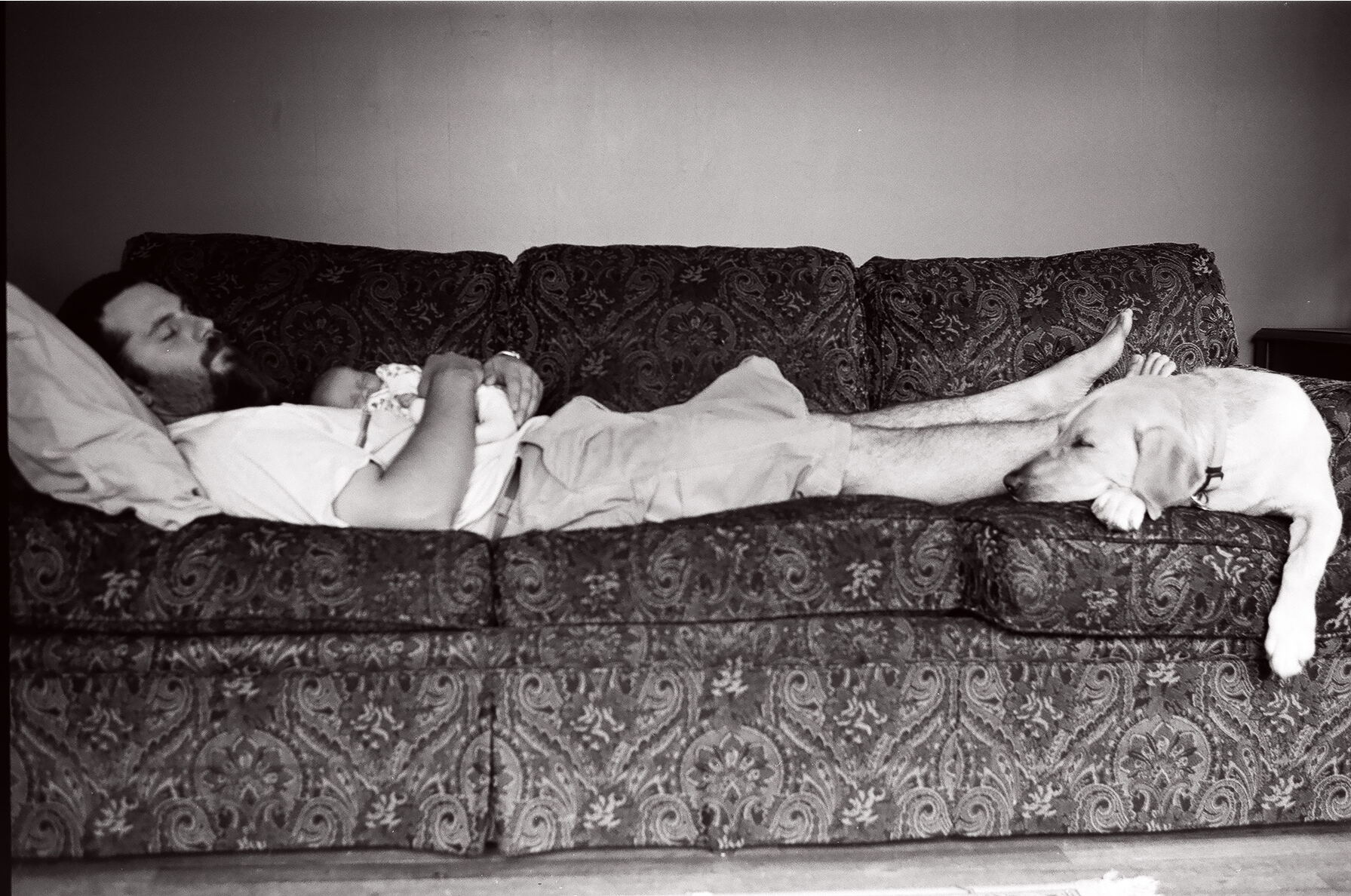