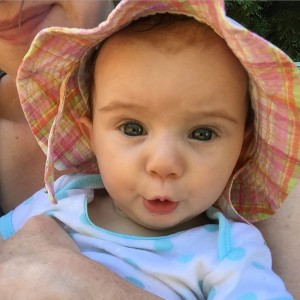 Alma makes out with her hands like a fifth grader who’s been allowed unrestricted access to R-rated movies. So, like fifth grade me. Except she cries if she bites herself too hard.

She’s happy and smiley so often, when she does gets upset — from a gas bubble or teething — she gets a confused look on her face, like she’s thinking, “This isn’t right! I’m a happy person! Why am I not happy?” Sometimes you can get her to smile at you in the middle of a crying jag, before she realizes she’s still pissed.

She’s muscular, just as Nora was. But she’s far more interested in moving around than Nora. She scoots around with her feet and if she’s lying back and wants to see something, she’ll repeatedly try to sit up, basically doing little baby crunches. She loves her Bumbo chair and sits it in on the table top while the rest of us eat dinner, watching us and sucking on her hands.

When you lay her back on her changing table, her face lights up, “Oh! There’s my beloved light switch!” She coos through her frequent diaper changes. She pees a lot.

She adores her dad and her big sister, showing all her gums and crinkling her eyes when she sees or hears them. “Everybody loves Alma Bea!” we all say to her, many times a day.

Nora loves to be responsible for watching her while I shower or pee (I’ve committed to peeing by myself as often as possible). Nora looks for excuses to pick her up and comfortably carries her all over the house until her arms get sore, then hands her off to me. A few weeks ago she told me that she should be Alma’s primary care-giver because she’d do a better job and she loves her more than I do. I nodded solemnly and told her I’d consider it.

I was worried Alma didn’t like her swing anymore. When I set her in it, she fusses unless she’s already asleep. But I found if you put some Marvin Gaye on the turntable, she chills out as fast as she ever did.

Charlie, the goofy hound mix, still comes running to check on her if she coughs. Though he mainly ignores the crying now. You know what would actually be helpful, Charles? If you didn’t howl and bark bloody murder every time you heard the diesel engine of the UPS truck. It always happens during her afternoon nap, which would be her longest one if he’d shut the hell up.

During the day, she mostly cat naps. Rarely do naps last more than an hour now. But she’s a good sleeper at night, so I’m not complaining.

I’m the opposite of complaining — which turns out is bewildered. I can’t believe this is all going so well.