I spent this last weekend with my parents and my sister and her beautiful family.  On Saturday, we went to the ocean for a day trip.

My oldest nephew, Sameer, is six weeks older than Nora. They had a raucous time climbing over sand castle remnants and being reminded not to throw sand at each other. 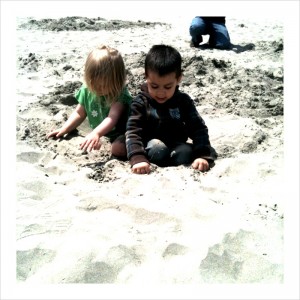 My youngest nephew, Arnav, was in the midst of ten-month-old angst: he was cutting teeth and getting over a cold. Naturally, when he fell asleep, it was time to get back to Portland while the getting was good.

The four-year-olds were exhausted, but still a bit wound.  And their shenanigans threatened to wake the little one.

So, my brother-in-law, in a moment of either genius or desperation, said, “Okay, we’re going to play a game. The person who talks the least wins.  Go!”

Thereupon the two children closed their eyes and went to sleep. For real.

And to his eternal credit, when they awoke back in Portland he declared, “You both won!”

I stand in awe.  Sumeet is humble about his accomplishment.  He claims his success was a fluke.  Still, with luck like that, I’d be stocking up on lottery tickets.