If I’m asleep, I’m snoring.  Not so my husband.  He only snores when he’s sick.

Nora doesn’t snore either.  So, last night, as she began snoring shortly after falling asleep, I thought, uh-oh.

During the night, she began crying.  Her head hurt and she had a sore throat.  As she put it, “It’s sore way back in my mouth.”

It’s rather amazing when your child can finally articulate an illness.  Though I’ve never had trouble telling if Nora was sick, as she gets tell-tale purple circles under her bright blue eyes.

Anyway, this morning, despite being more chipper than I thought she’d be, she has swollen glands and purple circles. 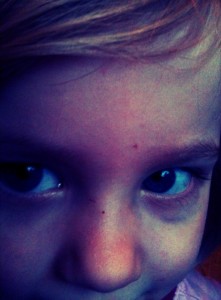 This is actually her first sick day of the school year.  She had a cold over Thanksgiving break, and one other cold that fell on a weekend.  It’s nearly February and she hasn’t missed a single day of school.  This is unprecented.  All those early illnesses appear to have built her one heck of an immune system.

So, I get to spend the day thinking of calming activities for her.  She’s already painted a picture, made some oatmeal and explained to me that, “Everything that is in my brain and in my heart I love and take care of.”

It’s going to be a beautiful day.