This season we’re tackling one of the most beloved series of all time: Harry Potter.

This week we look at the four-act story structure of Harry Potter and the Chamber of Secrets, pointing out the “tent poles” that hold the story up: the first plot point, the midpoint shift and the second plot point.

Then Nora uses the Five Commandments of Storytelling from the Story Grid to analyze the scene where Harry tricks Lucius Malfoy into setting Dobby free.

Finally, we take a look at the concept of foreshadowing, using the whomping willow as an example.

Season 4, Episode 2: Harry Potter and the Chamber of Secrets

Things we mention (or forget to mention) that you should check out:

This post was lovingly sponsored by our Patreon supporters (you can become one too!).

Most of my snobbery is of the intellectual variety, not the socio-economic. But still, it’s there. Since I was a teenager I tended to look down my nose at mainstream fiction and pop-culture. I was suspicious of anything enjoyed by “the masses.”

Which meant I missed out on a lot of good stuff. Like the entire Harry Potter series as it was being released, for instance. Gah!

I’m pretty sure that’s all snobbery actually is — just a fancy form of fear. If we partake in something that might be seen a silly, frivolous or low class, we’re afraid we’ll be judged harshly by those even snobbier (and more afraid) than we are.

But truly, I can’t think of a single instance where my snobbery has served me well (beyond maybe saving me from food poisoning, but food snobbery is something else altogether — that’s called having standards).

Every time I step beyond my own snobbish attitudes, I’m rewarded with fun new experiences and friends.

So, to hell with snobbery. I’ve decided that my middle years will be devoted to experiencing things I’ve always tried to avoid – like genre fiction. (Last year I tried zip-lining and it was AWESOME.)

Speaking of Harry Potter, for the new season of the Mommy’s Pen podcast, we’re going to analyze the story structure of all seven books! The first episode is already available.

Season 4 begins! This time we’re tackling one of the most beloved series of all time: Harry Potter. We’ll look at the global story structure for each book using a four-act structure, and we’ll do a breakdown of a favorite scene using the 5 Commandments of Storytelling from the Story Grid. We’ll also be nearly constantly interrupted by a preschooler and cap off each episode by defining a literary term you’ll want to know.

Things we mention (or forget to mention) that you should check out:

This post was lovingly sponsored by our Patreon supporters (you can become one too!).

Season 3 continues! We’re combining Nora’s passion for history with Sue’s passion for story structure — giving you a historical story and pointing out the structural elements that make it compelling. 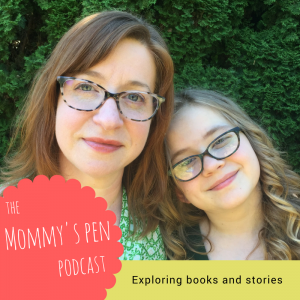 We look at the Greek playwright Aeschylus and his visit to the Oracle and his tragi-comic death. And there’s a bunny health update. Sorry about the sound quality. Sometimes it’s more important to get it done than get it perfect (not that we’ve ever had perfect sound quality!).

Things we mention (or like but forget to mention) that you should check out:

This post was lovingly sponsored by our Patreon supporters (you can become one, too!).