Tomorrow, I’ll have a post featured at Scary Mommy. It’s tentatively titled “How to Survive a High Risk Pregnancy Without Permanently Losing Your Shit.” As regular readers of my blog well know, this last pregnancy (and I do mean last) was pretty rough. But there’s something about it that isn’t widely known, so it’s time to fess up.

I would say on the privacy spectrum that starts at “Circumspect” and ends at “Over-sharer,” the dot that represents me is about three-quarters of the way to over-sharer. There’s not much I won’t talk about if the the right person is in front of me (or, you know, I have a largely faceless internet audience).

So, it was a really tough decision for me to not share the news about my twin pregnancy with my family and friends. That’s right, last August when I had my first ultrasound at seven weeks, we discovered I had two buns in the oven. Not one. Pretty exciting (and scary) news.

But, we’d just gotten the sad and deeply worrisome news that my sister-in-law had breast cancer. There was a lot of worrying going on already and I didn’t want to add to anyone’s burden. Especially given that my pregnancy was labeled high risk right out of the gate, due to my type 1 diabetes and my “advanced maternal age.” (Gawd, I hate that phrase.)

So, whereas with my first pregnancy the stick wasn’t even dry when I called my mom, this time, I waited.

I knew that “vanishing” twins were pretty common, and I wanted to save the pain to my family if one of our twins was destined to vanish. I told my sister and several friends, so I would have ample support in case of bad news, but that was it.

When you’re pregnant with twins, the sonographer names one Baby A and one Baby B, to keep them straight. Baby A is the one closest to the cervix. In our case, Baby A looked great. Baby B was several days behind in development. Just two weeks later, an ultrasound confirmed “no cardiac activity” for Baby B. It was a blow, but one we were braced for.

I waited until 12 weeks, when things were looking really good for Baby A, to finally make the call to my family to tell them the good news — and only the good news.

We have a happy ending, Little Alma Bea (get it? A and B?) was born on March 19th. And my sister-in-law has finished her chemo and radiation and is on the road to recovery.

But, being the writer that I am, I could only keep such an emotionally juicy story to myself for so long. This Scary Mommy post merely mentions the lost twin — mostly I offer tips to help others suffering through a high risk pregnancy.

I have written a Big Essay about the experience, and I’m looking for a special home for it. When it’s published, you’ll all be the first to know (after my mom, that is). 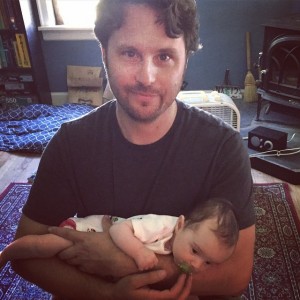 A toddler with a blond bob (Nora, five years ago), stirs a bowl of imaginary soup then puts the spoon to mommy’s lips, her eyebrows raised.

The little girl turns to her daddy. He bends down to taste.

A can of marking spray paint converts the backyard into a proper soccer field.

There are innumerable daddy-daughter day trips, to luscious waterfalls, placid lakes at the foot of Mt. Hood, lush forests. Picnic baskets are stocked with sweet treats to be shared. A potty chair in the back of the car.

He is the first to notice when she’s ready for the next challenge: getting her own glass of water by pulling out the bottom drawer and standing on it, crossing the street, taking full responsibility for feeding the dog and recording it on a special chart.

Presents are the opportunity to demonstrate trust and the possibilities the world offers:

Branches trimmed from the pear tree and draped with tarps become a magical backyard fort.

Deftly wielding a lancet, he pierces the skin of his wife’s forefinger and checks her blood sugar dozens of times during her labor and recovery.

He sits bouncing on an exercise ball. A second daughter, fussy and with the sea-anemone-like movements of an infant, finally falls perfectly limp as she’s cradled in her father’s arms.

Happy Father’s Day, Ben Campbell. You are loved beyond measure.

Today we stand poised to kick off what we’re calling The Summer of Kid Legs.

We’re devoting ourselves to good, old-fashioned fun — as evidenced by daily pictures of eight-year-old Nora’s kid legs. Legs that will get progressively dirtier, tanner and (inevitably) more bruised and scabby as she runs, swims, climbs and wipes out.

Filthy, battered kid legs are emblematic of summer. So, join us, won’t you?

Today is the last day of school.

And it would have been my last day of maternity leave. Tonight is the night I would have found myself crying in my sleep, just as I did eight years ago.

This time, I won’t spend my energy on work that doesn’t quite matter enough while my baby sleeps in a crib with plexi-glass sides. I won’t spend evenings scrambling to get breast pump supplies cleaned and a diaper bag filled for the following day. I won’t squeeze the important parts of my life into the margins of a workday.

I spent over two years of hemming, ha-ing and worrying that a move toward self-employment would bring catastrophe (foreclosure, food stamps) down on my family. But now, facing two alternatives, one that pulled me and one that repelled me, the choice was clear.

Writing is now my real job instead of my side thing. And lo — I’m still paying the mortgage and the grocery bills.

It’s harder than I thought. I half expected to discover some rent in the space-time continuum for weeding the tomato beds, baking bread and diving into the neglected pile of books at my beside. No such luck.

I’ve been trying to find my groove for two months now. Writing during naps and between diaper changes. Keeping the baby far enough from the electronic devices that I don’t suffer mommy guilt over the potential hazards of Wifi waves. I’ve found there’s no sense trying to stay in the groove. It’s best when I jump in and out of it — or rather, I jump from one groove (the smiles and tears of my children) to other (inside my own head, writing), knowing I have little control of when the jump happens.

If I try to ride the ridge between the grooves, I’m breaking my own rule — if the baby’s eyes are open, my full attention is with her — and I pull myself back to what’s important. The time she is little, I remind myself, lasts about as long as a truly deep breath.

I know that now, as I look at my eight-year-old, with her enormous-seeming head. I was never resentful of her getting older and bigger. Never wanted her to “just stay little.” She’s doing the hard work of growing up, just as she should. She doesn’t need to feel me pulling her back into babyhood.

The more I settle in to the moment and soak up the crying, the eye contact during feeding, the smiles, the diaper changes, the more I can let go when time inevitably lurches into first steps and first days of school.

And now, with my own work, I’m finally comfortable with the example I’m setting for my girls.

Everyday, softly, my life will whisper to them: many things are out of your control, but you can take risks that make room for love.