It’s that time again. Time for me to off the deep end, craft-wise.

Every year Nora’s school holds a fund-raising auction and each class makes a big-ass something that gets donated to the cause.

This year’s something was my idea, though now I have mixed feelings about not keeping my mouth shut — as I really just wanted to make it for myself. It’s going to be a supreme exercise in detachment to let this sucker go.

It’s a quilt, of sorts. We’re modifying the ingenious beekeeper’s quilt from Tiny Owl Knits by making it mixed media, so the little hexagons won’t just be knitted, but also crocheted and sewn (to maximize the skill set of all the class parents). Also, each child in Nora’s class will draw a bee which we’ll embroider on the fabric hexagons.

On top of that, we’ll build a beehive and provide all the supplies needed to start beekeeping (including bees!). Yes, people really do that here in Portland.

And we’ve got to get it all done by March 1st.

Did I mention that it took the woman who wrote the quilt pattern a year to make it? Never mind. I have complete faith in crowdsourcing, Waldorf style. Wool motivates us.

If there are any knitters or crocheters out there who want to bust out a few hexagons, let me know. I can supply yarn and stuffing and instructions. We need all the help we can get.

And please tell me about the craziest craft project you’ve ever done. We need ideas for next year. 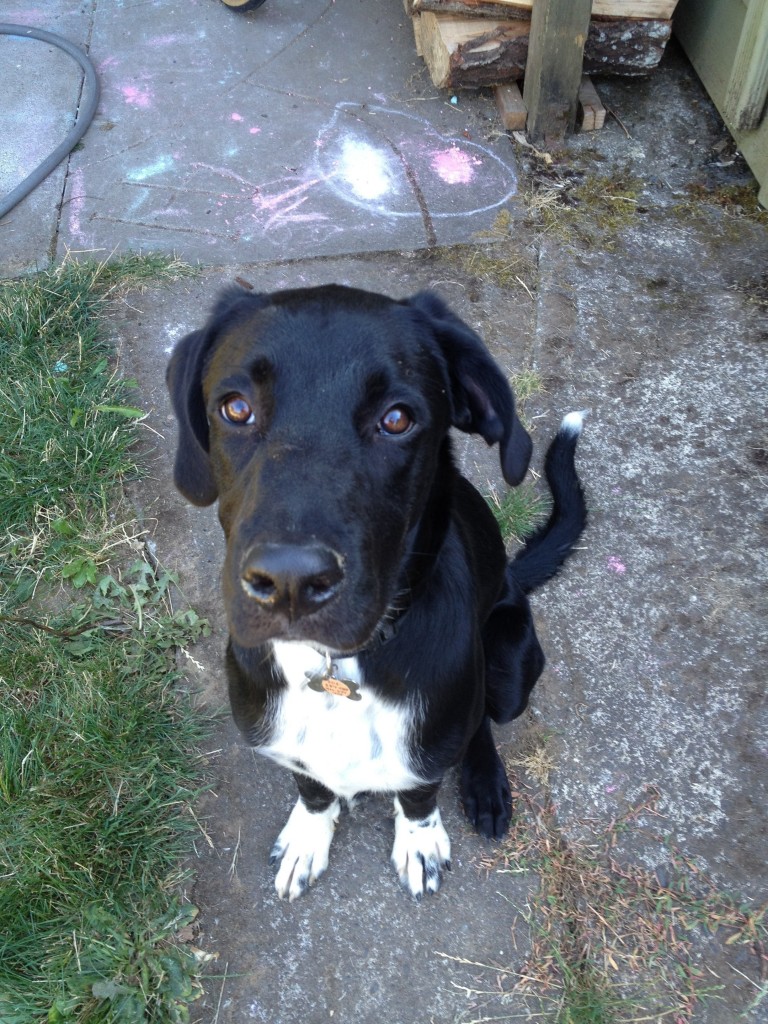 Meet Charlie, the new guy. We got him in September, when the dog-lessness of our house became unbearable (to two-thirds of us).

He is a cuddle bug. With the world’s longest tail. (18 inches. Ben measured.)

But he has some issues.

He’s a rescue, and as such, he classifies the entire world into two categories: things to eat and things to fear. We’re working through it all, but it’s a lot of, well, work.

Sometimes, we don’t do such a great job of keeping on top of his needs. As every responsible dog owner knows, doggie mistakes are really human mistakes.

Which brings me to:

A non-exhaustive list of things Charlie has eaten, chewed, defecated on, vomited on or otherwise destroyed since his adoption:

(Really, this list should really be in a big globby paragraph — Salinger style — but in this internet age we need bulleted lists or our little heads might explode.)

And all this has occurred even with the judicious use of baby gates and a considerably bully stick budget.

Miraculously, none of these ingestion events have landed him in the emergency room. But if one ever does, we had the good sense to get pet health insurance this time.

As most of you know, Charlie has big shoes to fill. An eight-year-old well trained purebred lab he is not. He’s just a year old, full of energy and uncertain of the world. But with lots training and lots of love, he’ll grow into the role of steadfast companion.

Speaking of growing, in the short time we’ve had him, he’s gone from fifty-five pounds to over seventy. Which leads me to worry, perhaps he’s growing into the tail?

1. For awhile, all I thought about was Hoover and there are only so many doggie cancer posts I can subject all of you lovely people to.

2. I fell into a brief, grief-related depression and needed to focus on eating spinach dip.

3. Nora wasn’t saying anything blog-worthy, because she was too sad. (See reason #1.)

4. I was busy with freelance writing assignments, for awhile.

5. Somehow I got talked into supervising people at my day job. And that shit is tiring. (Don’t worry, it’s only temporary.)

6. I spent several hours each day trying to prevent our new dog from eating the living room rug.

7. Then I was busy with the holidays.

8. I was knitting a shawl for Nora, then a big-ass doily-blanket thingy.

9. I simply fell out the habit. And that’s a very bad thing for a writer to do.

10. I needed time to figure out if this blog still had a place in my life.

And I think it does. Here’s what to expect from Mommy’s Pen going forward:

I hope you’re still with me. What’s been going on with you?