In no particular order:

My dear friend @kristinglas over at Peace, Love and Muesli has a great linky going right now. It showcases a mom’s ability to think fast, multi-task and make life just a little bit better in so many ways.

The idea is that a bunch of us will share our greatest fast thinking moments, and benefit from each other’s genius. (I least that’s what I think the idea is — Kristin can correct me if I’m wrong.)

So here’s my latest fast thinking…

I’m keeping a half an eye on my neighbor’s house while she’s in Arizona.  My neighbor happens to have some fabulous rose bushes in her front yard.  Roses she’s not here to enjoy.  So, when Nora and I walk over to pick up the mail, we bring along a pruners and steal a big bouquet for our table.  Some call it thieving, I call it good thinking.

Now head over to Peace, Love and Muesli and check out some other great ideas or add some to the collective wisdom pile… 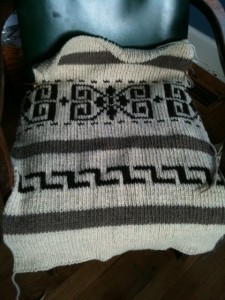 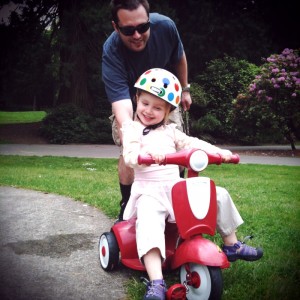 For the first few days I’m on the pump, I have to wake every three hours and test my blood sugar, to insure my insulin doses are set up correctly. Going in, I was short of sleep. So, last night, my nurse agreed to give me a break for a night.

Nora was tucked in and sleeping, I was dosing off, with the help of my good friend dyphenhydramine (I wasn’t leaving a good night’s sleep to chance!). It was nearly 9:00pm.

And then some jerk knocked on the front door, causing the dog to bark and Nora to wake up crying in fright.

I flew to the front door and opened the peep hole. It was not a neighbor in need of help, it was two schmucks I’d never seen before. “Go away!” I shouted and slammed the peep hole.

“Go away?” the fat jerk queried in a surprised, nearly mocking tone.

There are many things I could have said in response.  For example:

“Listen Jackass, you just woke up my entire family, the chances of you selling me anything are the same as your chances of seeing me eat two turds plucked out of a stinking, tepid rain barrel.”

“You’re lucky I don’t own a gun, fatty, cause you’d be ready for the smokehouse right about now, so BEAT IT.”

But he didn’t deserve a response, and Nora needed attending.

Seriously,  those two asshat solictors are so lucky I don’t own hand gun.

Goodness, help me, I vlogged about my new insulin pump.

This is for EDUCATIONAL PURPOSES.

I did this for all you non-diabetics out there.

The video doesn’t contain a comprehensive explanation of how an insulin pump works, so if you have questions, by all means, ask.

I’m already far into TMI territory, but I’m willing to show my tummy and answer questions if it increases understanding of diabetes.