Nora is perched on the counter top in her pjs.  She is systematically removing items from the cabinet and lining them up in orderly rows on the counter.

“Um, I’ll take some pasta and a can of tuna and — can I buy just one orange or do I need to buy the whole bag?”

I pull an imaginary five dollar bill from my imaginary pocket.

“No, five real dollars,” she insists.

“But I don’t have five dollars.”

I scrounge in my purse and find two quarters and a penny.

“This is all I have, do I need to put something back?”

That is a savings of $4.49!  Be wary in your negiotiations with me people.  I am shrewd. 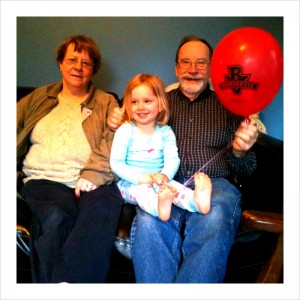 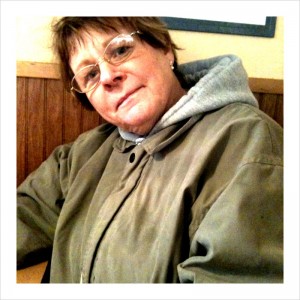 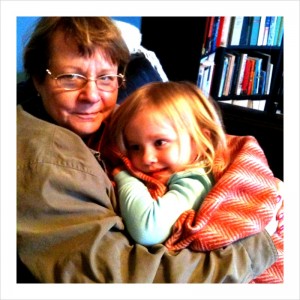 My mom, dad, brother and sister-in-law are in town.  They drove from Minnesota to Portland in two days, a blizzard on their heels.

This is my dad’s first trip to Portland.  We’ve lived here eleven years, but I guess he wanted to make sure we were serious about it before he traveled cross country to see our place.

He’s impressed that it’s so green and we have flowers already.

My mom’s been out to visit several times. I hope I’m wrong, but this could very well be her last trip to Portland.  She has Alzheimer’s.  She’s on a combination of Alzheimer’s drugs right now and doing quite well in my estimation.  But there’s no predicting how long it will be before she deteriorates.

Last night, she sat across the table from Nora while I made dinner.  Nora held a tortilla chip out to my mom and then pulled it away as my mom dramatically reached for it.  Over and over.

Nora was in stitches and my mom wore that grin of hers that says she’s having fun.  She sort of raises the left corner of her mouth.

I wanted to drop everything and capture it on video.  I wanted to seal up that moment in a glass milk bottle and keep it on a shelf. Something huge was happening in the space of a tiny, ordinary moment.  A woman was connecting with her grandchild; they were both completely in the moment.

I’m hoping the next few days will hold many more of those moments.  I plan to have my camera at the ready.

I am not safe in my own home.

I can be standing in the kitchen chopping vegetables, or sitting in the dining room, sipping coffee and filling out the tax planner — and suddenly — ambush!

I feel the terrible force of thousands of feathers slam into my thighs.   Or, if she can’t get enough momentum on her swing, I watch the pillows pull her backward onto her tushy.

I never know when an attack is coming.  Sunday morning, she enlisted her father to distract me with some nonsense about a flying squirrel outside, so she could launch a sneak attack.

She is a master strategist, make no mistake.

I must remain vigilant.

Here are a list of things I did on Saturday that I don’t normally do:

At long last, it was auction time! The fundraising auction for Nora’s school was finally here.

The theme was “The Silent Movie,” thus the flapper garb.  Everyone looked fabulous.  Again, I love the way Waldorf people are not “too cool.”  Singing and dressing up are to be embraced, not scorned.

The evening was divided into silent auction, dinner, dance performance by the Body Vox dancers, the live auction and dancing.

Ben and I agreed not to buy anything, but once we got there, we realized the starting bid prices at the silent auction were quite reasonable.  However, I was outbid on everything in the end.  Happily, the items I placed in the silent auction both sold — the knitted elephant and hand-spinning lessons.

Dinner was catered by one of my favorite local bistros: Carafe.  The chef/owner, Pascal Sauton, is a parent at our school.  He was also the reason I wished I was rich — one item up for bid at the live auction was for Pascal to come to your house and give you cooking lessons.  In his words (and French accent), “I’ll come to your house, mess up your keetchen, drain your liquor cabinet and then leave.”  But he was only teasing.  His item brought in around $2800, so he offered a second one and sold it to the back-up bidder for the same amount.  Ce n’est pas mal.

The sale of the rug was the final event of the evening for us.  It was around 10:30, which is several hours past our bedtime.  The others partied on long, long into the night.

I’ve put down my book and switched off the lamp.  I’m sinking into the mattress when I hear, “Mommy! Mommy!”

I patter down the hall and crack open her door.

“I need you to snuggle me for just a minute and I promise I’ll let you go.”

I lay down beside her and she wraps her arms around my neck.

“I love you more than you love me.”

“That’s not even possible,” I tell her. “I love you a million, billion, trillion, gazillion times.”

“Well, I love you a billion times,” she says emphatically.  “But, you know, it’s not really a number, it’s a way.”

She hugs me again.