The other morning, after we’d showered, Nora curled herself in a ball on the hallway rug with a towel over her head.

“I’m a tiny bulb under the soil,” she explained. 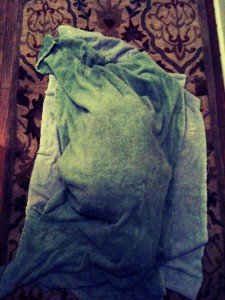 I left her there for a few minutes to grab something from the laundry room.  When I came back upstairs, my little bulb had bloomed. 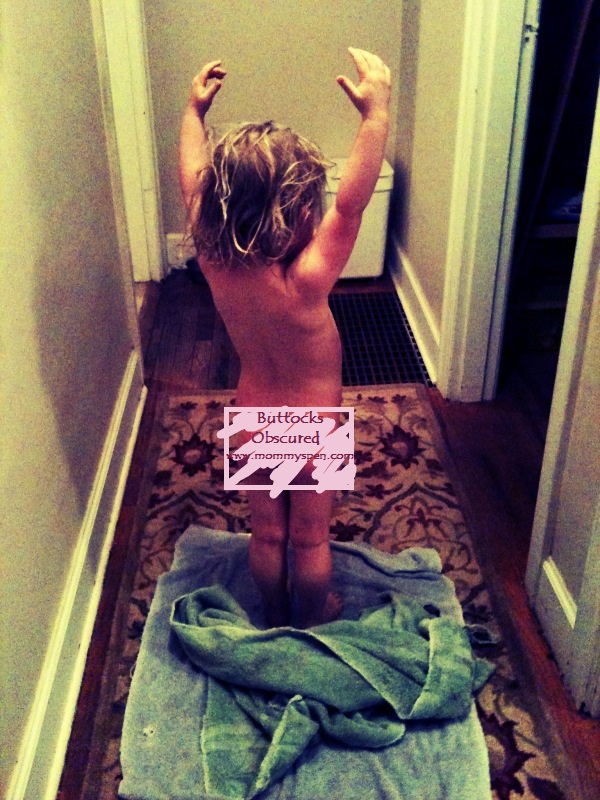 Ben will tell you I blew up the microwave.  But it’s a tough case to make given that I wasn’t even home.

Just before I left for my parent council meeting on Tuesday, Nora was asking for popcorn.  I went to the kitchen and looked for the plain paper bag I had used for the last batch.  It was gone, but I found a brown paper bag from the Safeway deli.

“Just throw a third of a cup of kernels in a paper bag, roll up the end and use the popcorn button on the microwave.  But be careful and test this bag by itself before you do it.  It has writing on it and might catch fire.”

See?  I explicitly warned him.

When I returned three hours later, the microwave was nowhere in sight.  The kitchen was spotlessly clean and there were fans set up all over the kitchen.

“Did you guys blow up the microwave?” I asked as I entered the bedroom.

“I didn’t blow up the microwave.  It was your dumb idea.”

“It worked for me just fine the other day.  I guess you have to use a plain paper bag.”

“I couldn’t shut it off fast enough.  It caught fire immediately and there was a terrible chemical smell.”

“What the hell do they put in that ink?  Metal?”

“And Nora was really sad that she didn’t get any popcorn.”

Remember the days when a paper bag was just a paper bag?  And you couldn’t be blamed for things that happened while you were off the premises? 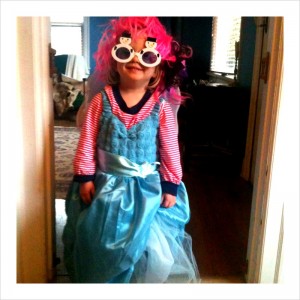 The other day, I heard myself telling someone that I wanted to write for a magazine that wasn’t about kids. “I want to write for grown-ups,” is how I put it.  But, it got me thinking. People without kids seem to think parental concerns are uncool. Why is that?

So, I started working on a post about why parenting is cool — until I realized: it isn’t.

It can’t be.  Cool is for people with time on their hands.  Hours to think about their hair and clothes and new music.  Days to fret over choosing hippest possible frames for their glasses.  Weeks to find the best local coffee shop.  And that’s fine.  I understand appeal of that lifestyle.

But it’s not for parents.

We parents haven’t seen any new indie movies or fretted over the perfect messenger bag to use while riding our fixed gear bicycles.  We are too sleep deprived to go clubbing.

We have play-dough stuck under our fingernails and Raffi running through our heads.

We pack our kids a healthy lunch every day.  We worry over little psyches and social-emotional health.  We fill out school paperwork and write checks for every fund raiser.  We know how to rotate acetaminophen and ibuprofen for maximum fever reduction.

As I write this, I am sitting on a stool in my bathroom, holding a laptop, keeping my 3-and-a-half-year-old company as she poops.  No one on this earth considers that “cool.” But she just told me she loves me “more than anything.”  So there.

Parenting isn’t cool; it’s important.  And it’s when you realize that being cool isn’t important.

Now, if you’ll excuse me, I have crucial work to do. Nora says it’s time for me to wipe her bottom.

I’m over at Peace Love and Muesli today, guest posting for Kristin (@kristinglas, for you Twitter folk).  Her blog is right up my alley.  She writes about healthy eating for the whole family with a practical approach and a dry sense of humor.  You really should be reading her all the time.

So come and read my post, then read a bunch more.  You’ll be glad you did.

Incidentally, I also guest posted for another great gal named Kristen (aka klz, or @taminginsanity) at Taming Insanity last week, but I was too sick that day to bother to tell you about it here.

Have a great week, everybody.

A few nights ago, Nora’s school hosted a “Journey Through the Grades” event.  It was a chance for parents to move from classroom and classroom and get a glimpse of the Waldorf cirriculum for elementary through middle school.  It was a great experience.  Grown-ups sat at tiny desks, singing songs and drawing pictures.  We all left happy.

But perhaps even more enlightening was the half hour spent before the event with other kindergarten parents.  Halfway through the year, we are all starting to loosen up around one another.

I was telling the Louie’s mother (names have been changed, as they don’t know I’m blogging about them) about shenanigans Nora and Louie had been up to.

“Nora and Louie set a trap for Harry.  Out on the playground the dug a hole and covered it with sticks, hoping he’d fall into it!”

Harry’s father happened to be sitting right there and his ears perked up.  Nora and Harry had a history of not getting along.  Harry had called Nora little.  (She is, especially compared to kids in her class from a year to three years older.)  We had done some role playing on how to handle these kinds of comments without getting upset:  “Why, yes, I am smaller than you because I’m younger.” etc.

Harry’s dad then told of the day Harry came home with a huge, bruised bite mark on his shoulder which he said Nora had given him.

“Little Nora did that?” Harry’s dad asked him.

“She’s little but she can hold her own,” the five-year-old Harry replied.

Nora had told me that she and Harry were getting along better lately.  But all I could get out of her was, “We worked it out.”

As my friend Monica likes to say, sometimes that girl is straight up gangsta.