The day we got back from the beach, Nora went to visit the neighbor and Ben and I entered her bedroom with a few large trash bags.  In the bags went markers without caps, plastic fake food, various bits of string, broken toys, annoying toys, perfectly good toys, dried up play-dough and even some books.

We threw the bag of decent toys in the trunk of the car, which Ben drove straight to the nearest Salvation Army donation station.  Meanwhile, I made Nora’s bed, dragged another half dozen large toys downstairs into storage, and set up a kid sized table and chair in her bedroom.  All play clothes went in a bin on the shelf, musical instruments in another bin.  A large wicker basket holds some open-ended, mostly wooden toys and some stuffed animals.  The top of her dresser displays rocks, pinecones, chestnuts and seashells she’s collected: her “nature table.”

When she came home, I showed her to her room.

“We cleaned your room for you!”

She stood in the middle of the room and spun a slow circle in wonder.  I held my breath.

“I love it!  I always want it like this!”  she said.  She then commenced to play alone in her room with legos she hadn’t touched in months — because there was room on the floor to do it.

A bit later, I gave her some rocks she’d collected at the beach and a glass milk bottle.  She sat at her table and carefully, tidily, sorted her rocks.  Those that fit in the bottle went to her nature table, the rest went outside.

She soon fell fast asleep in her bed.

It’s been several days and not once has she asked for any of the toys we discarded.  Each night, we pick up all her toys and put them in their place.

I’ve read a book, you see.  It’s called Simplicity Parenting:Using the Extraordinary Power of Less to Raise Calmer, Happier, and More Secure Kids by Kim John Payne.  This books asserts that tsunami of modern culture that assaults our children is stealing their childhood.  Children have too much, too soon.  They are assaulted with every kind of screen, and every kind of commercial and nearly buried in a deluge of toys.

It’s no coincidence that as the pace of modern life has sped up, our children are diagnosed with more and more attention and compulsion disorders.  Payne, a therapist, says that he in all his years of practice, has never met a “disobedient” child, only “disoriented” children.  He has found that by simplfying a child’s home life, behavior problems — hyper-activity, explosive responses, blurting at inappropriate times and controlling behaviors such as picky-eating — melt away.  Restoring balance also helps their specific potential blossom.  He’s seen kids go from diagnosable, to quirky, to their own special genius.

Payne advocates “four pathways” to simplifying: declutter, create a rhythm in your home, stop the over-scheduling of our kids and filter out the adult world (this includes screen time).

Regular readers of this blog know that we don’t have a television in our house.  We follow the same routine nearly every day and always eat dinner together. We are already on the “simple” end of the spectrum compared with most American families.  But, there is always room for improvement.

Lately, I’ve been noticing that my penchant for listening to NPR is causing disturbance in our household.  The awful news from places like Afghanistan and Tucson are repeated every half hour.  During the news coverage of the Arizona shootings, I became depressed and upset over the news — and worse — the coverage was beginning to be absorbed by Nora.  At one point, she looked up from her play and said, “They said ‘Arizona!'”  She was pleased she recognized the name of a place where her dear Nana Sandi happened to be, but I was disturbed.  How long until she deciphered what the story was really saying?

And, of course, clutter has been an issue at our house for sometime. Now that Nora’s room is done, it’s on the the closets.

You know how once you become counscious of something, you suddenly see and hear about it everywhere?  Well, I heard of the book after my mother-in-law mentioned it, then, while researching an article I was writing on bullying, I found the work of Kim John Payne.  Then, at a parent council meeting, I found out that Payne would be in Portland to deliver a lecture and a workshop on Simplicity Parenting.  I’d be a fool not to notice what was suddenly all around me.  I registered Ben and I for the lecture and workshop, with Ben’s enthusiatic blessing.  He couldn’t wait to prove how right he’s been about clutter all these years.  And right he was.

Payne is a gifted and engaging presenter.  He had a rapt audience for his lecture at a local Unitarian Church.

And he finally gave me the counter argument to people who tell me that I’m depriving Nora by not having a television.  The fact is that screens are everywhere, and they overwhelm the human brain —  they de-volve us.

Payne described a lecture he attended where a dozen or so images of brains were shown.  On one end of the spectrum, the brain was lit up in all areas, a beautiful rainbow of activity.  At the other end, only the emotional center of the brain was lit active.  The middle images were in between.  These were primate brains, from the most intelligent ape to the least, reacting to the sound of a thump!.  The lit-up brains were thinking, “what’s that, where is it, can I eat it? Is everbody okay? Can I play with it?”  The lesser apes thought only of “fight or flight.”

The average American child gets over 7 hours of screen time a day.  Does that seem rational?  Does that seem healthy?  Absolutely not.  It’s up to parents to put an end to this madness and give our kids their childhood back.  By keeping TV out of our home, we are creating a sanctuary, a place for Nora’s brain to get the respite it so dearly needs.

There are plenty of places and so much time to come for screens.  She doesn’t need them at home.

If you’re feeling the chaos of the pace of modern life, I urge you to check out the Simplicity Parenting website and check out this book.

The beauty of this movement is you are able to create more harmony in your home without having to do anything special.  In fact, it’s about not doing stuff.  Fewer screens, fewer lessons. More time for children to create their own worlds, instead of having ready made ones thrust upon them.

You will indeed be surprised at the power of less.

One summer when I was about eleven, I spent hours trying to teach myself to gleek.  You remember gleeking?  Pushing your tongue around the bottom of your mouth in such a way as to make a stream of spit jump out?  I’m pretty sure it’s an anatomical impossibility for me.  But believe me, I tried.

Nora has taught herself to snap her fingers.  Really.  Not quite four, the determined little thing has been feverishly rubbing her middle finger against her thumb for days.  And she really can snap.  As loud as I can.  She now wanders about, snapping as she goes.

This little feat made me realize: she’s at the brink of kid-dom.  No longer a baby or a toddler.  She’s mastered, walking, talking, running. She wants to jump rope and snap.

She just walked up to me and said, “I can whistle!” and then squealed in a high pitched voice, “Eeeeeee!”

She needs a bit more practice on this one.

I wonder if she could teach me how to gleek, in a few years?

I’ve been at the beach for 95 hours.  Amazing weather for February in Oregon.  We even saw the sun several days in a row. 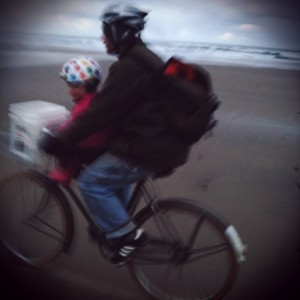 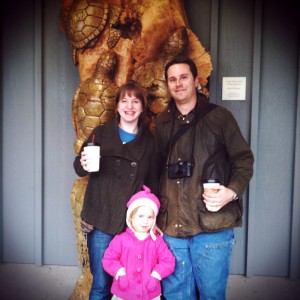 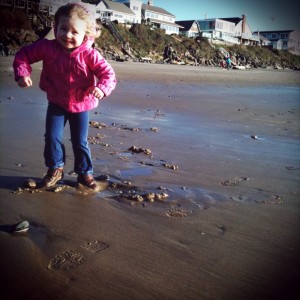 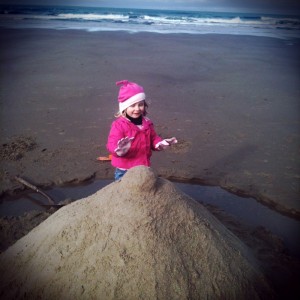 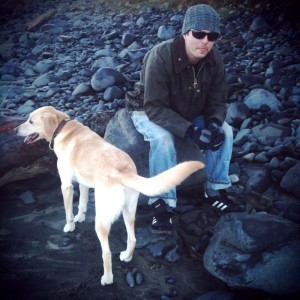 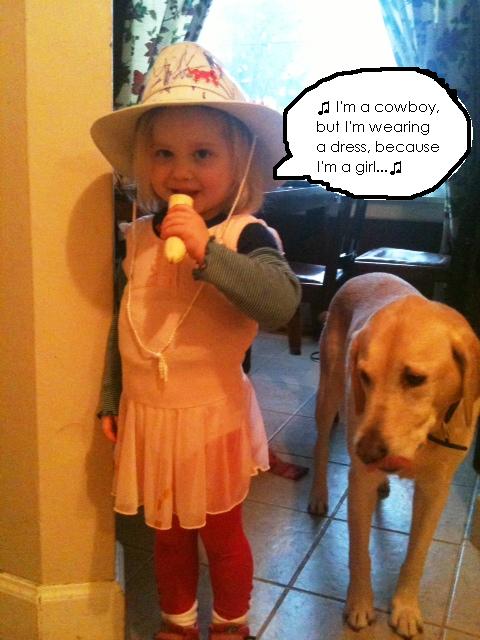 “Mommy, do you have your phone with you?” Nora asked from her car seat.

“Can you play the sweet little bee song for me?”

Our first Valentine’s Day together, our relationship was only a few weeks old, so we both agreed not to make a big deal out of it. (This was 1998.  Good Lord.)

I went out to my car that day and found a small chocolate heart pinned under my wind shield wiper.  I thought it incredibly romantic.

Since 2000, Ben makes me a heart for Valentine’s Day.  He doesn’t just cut something out of red construction paper, he bends metal and melts steel.  He chips away at stone, pours molten lead into a mold.

Every Valentine’s Day, I remember that I’m the luckiest girl around.

Here’s hoping that someday I’ll be staring at a shelf with sixty or seventy hearts on it.