“Nora, which way is up?” Ben asks innocently.

Nora points to the ceiling and Ben’s hands lunge for her armpits.  A tickle attack has been launched.  She shrieks and giggles.

He taught her the hand signals for telling your backhoe operator to raise his bucket.  You raise your arm and draw a horizontal circle in the air.  This is also a ruse to get at her pits.

Always, it lights her up.

I once had a life coach disguised as a billiards teacher.  While I didn’t actually learn to play pool, I did learn lots of other stuff. Like the concept of choosing a state over a status.

Allow me to illustrate this concept:

The trick to this is stopping to identify if the choice you are about to make is based on status or state.  It’s not always as cut and dry as the examples above.

Take Nora’s wicker lunch basket, for example.  The supply list sent out by her Waldorf school called for a “plain wicker basket” for packed lunches.  I fell in love with this idea.  How rustic and earthy.  How very Waldorf.

We went to Goodwill and picked out several baskets, looking for the right fit.  Everyday, we were schlepping a basket weighed down with an ice pack, water bottle and food onto the bus.  Half the time the contents dumped out on the sticky bus floor.

Last week, the assistant teacher pulled me aside and let me know Nora was struggling to carry her basket outside by herself.  It was heavy and clunky.  One day, it had actually brought her to tears.  I immediately realized my mistake: the wicker basket was a Waldorf status symbol.

Last weekend, we purchased a cloth lunch bag with a zipper.  I can carry it in my bag on the bus, and Nora can easily tote it around.

The first Tuesday of the month is Parent Council night at Nora’s school. Did I mention I am the proud Parent Council Representative for the Cherry Blossom Kindergarten?  I can’t imagine you are surprised.

This means Ben and Nora are on their own that night.  I take off after dinner and they play, have stories and bedtime.  This last Tuesday, Nora wanted to go in the backyard and kick the soccer ball around.

Though I had a productive weekend and paid a neighbor kid to mow the front yard, the back yard is still overgrown (stupid rain brought the grass back to life).

As I was getting ready to leave, I looked out a back window and saw this: 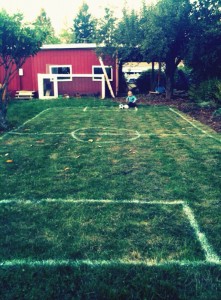 Ben had carved a soccer field out of the wilderness and painted lines.  It’s not exactly regulation, but it’s not just “kicking a ball around.”

Dads are so damn cool. 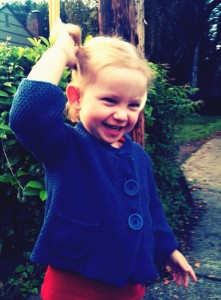