Few things are as compelling to me as my daughter singing.  Whether it’s a few tentative bars of Let’s Call the Whole Thing Off or belting out the ABC song, the sound of her little voice stops me in my tracks and makes me breathe deep with pride. 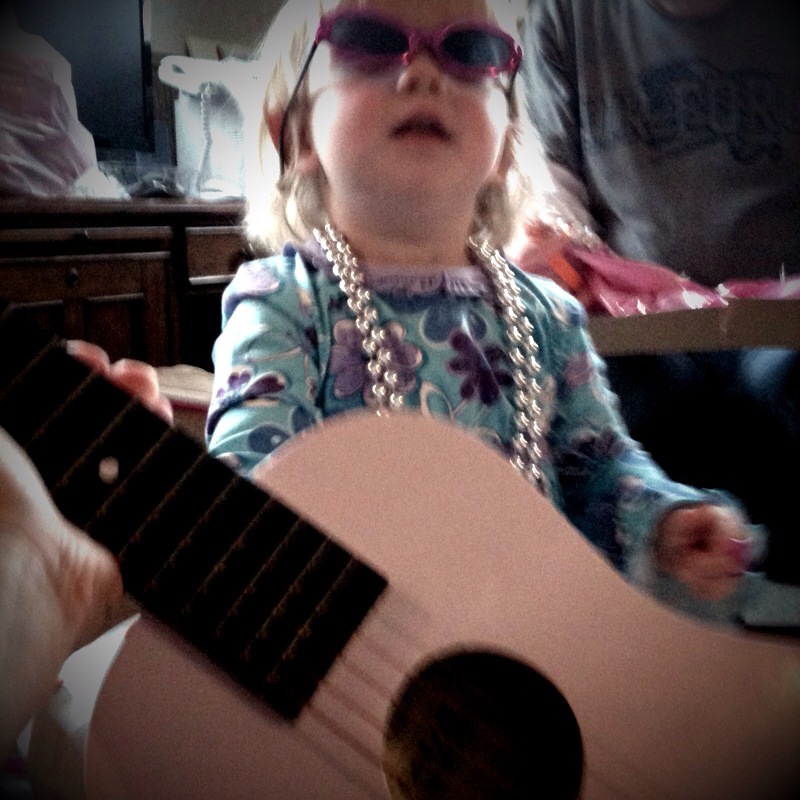 My husband is not a fan of singing.  And live music practically gives him a panic attack.  He does like music, just of the studio produced variety.

I grew up singing.  I was a choir girl and was (briefly) a singer in a rock band in Minnesota.  I don’t sing around Ben, because he’s unappreciative and spoils the fun.  This means I am limited to singing when I am in the shower or alone in the car.  When I got pregnant, I warned him (though I probably didn’t need to) that he was never to say anything disparaging about singing in front of our daughter.  I also theorized that our daughter’s singing would sound beautiful to him.

I was right.  Whenever Nora breaks into song, Ben breaks into a big grin.  Nora has my love of singing, but Ben’s dislike of hearing anyone else sing.  There was a period when I would start to sing something and she would shout, “Stop!  I hate music!”  It’s weird to hear a two-year-old say she “hates” anything.  Ben swears he did not teach her this.  She must have picked this up at school.  (Same place she picked up, “I’m going to spank your bottom!”)

Unlike her father, she likes live music.  The local farmer’s market has live bands in the summertime.  There’s a bluegrass band and an African drumming band.  She stands mesmerized as I start to cry (because I’m prone to blubbering) and poor Ben starts to sweat (panic attack).  She would stay for hours if we didn’t entice her away with baked goods.

She gets the love of baked goods from both of us. 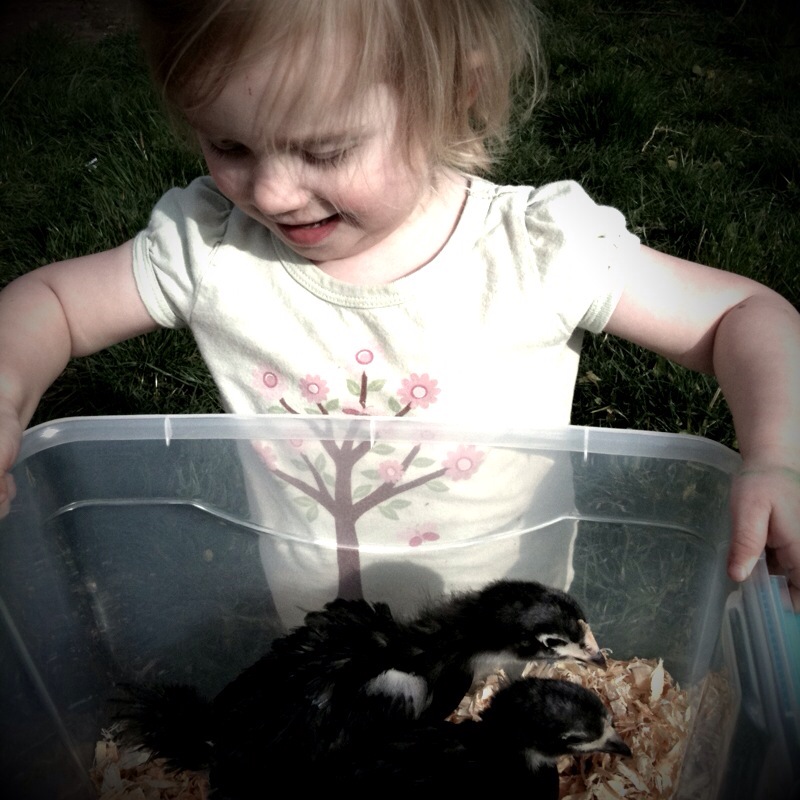 I am close friends with a woman, I’ll call her Julie, who was sexually abused as a child.   Julie is comfortable enough with me to refer to her abuse from time to time.  Sexual abuse is at the top of my list of parental fears so, not long ago, I asked Julie for some advice.  I prefaced it by saying that it was perfectly okay if she didn’t want to discuss it, but did she have any suggestions on ways of keeping Nora safe from sexual abuse?

She set her jaw and thought for a moment.  She said her abuser was a member of her extended family.  Her mother had been a very trusting person.  It never occurred to her mother that she wouldn’t be safe with family.  Julie’s mom taught her all about stranger danger, but was oblivious of the dangers closer to home and unwittingly left her in the care of an abuser.

We talked about my approach to prevention, given Nora’s young age.  Ben and I teach Nora that she is the only one allowed to touch her private parts, except for mom and dad to help clean, and the doctor.  Julie liked this distinction, again, she had been taught not to let strangers touch her — not that she was in charge of her own body.

Julie also said she would never advise me to leave Nora alone with a male care provider.  This made me think.  Nora has two male teachers at daycare who we consider fantastic.  I would probably hire them to sit on a weekend should the need arise.  True, most abusers are men, but sex abuse by women is not unheard of.  Would not hiring trusted male teacher to babysit at home be crossing the line into paranoia?  Probably?

What’s great about a daycare center, as opposed to daycare in a private home, are the controls put in place.  There are usually two teachers to a room, and management is always walking among the rooms –the chance of getting caught prevents possible abuse.  In an in-home setting, you don’t know who’s in the house all day.  There are no controls.  Same with hiring someone to sit in your home – unless you want security cameras set up all over the house.

At the end of our talk, Julie thanked me for asking her advice.  She said it was empowering to provide information that might keep Nora safe.  I was glad I asked, and realized I had much research to do.  Turns out, April is child abuse prevention month.  I found some great tips on preventing sexual abuse at stopitnow.com.  They have loads of information on prevention, which is obviously the goal, and also how to create an atmosphere where your kids will talk to you if (GOD FORBID) something should happen.  They also have sharable tip sheets on different topics, such as what is (and is not) appropriate sexual behavior by age group.

Here are some prevention techniques from stopitnow.com:

Some statistics that stood out for me:

Let’s be about making sure our kids don’t become a statistic.  Arm yourself and your child with prevention techniques.  Start now. 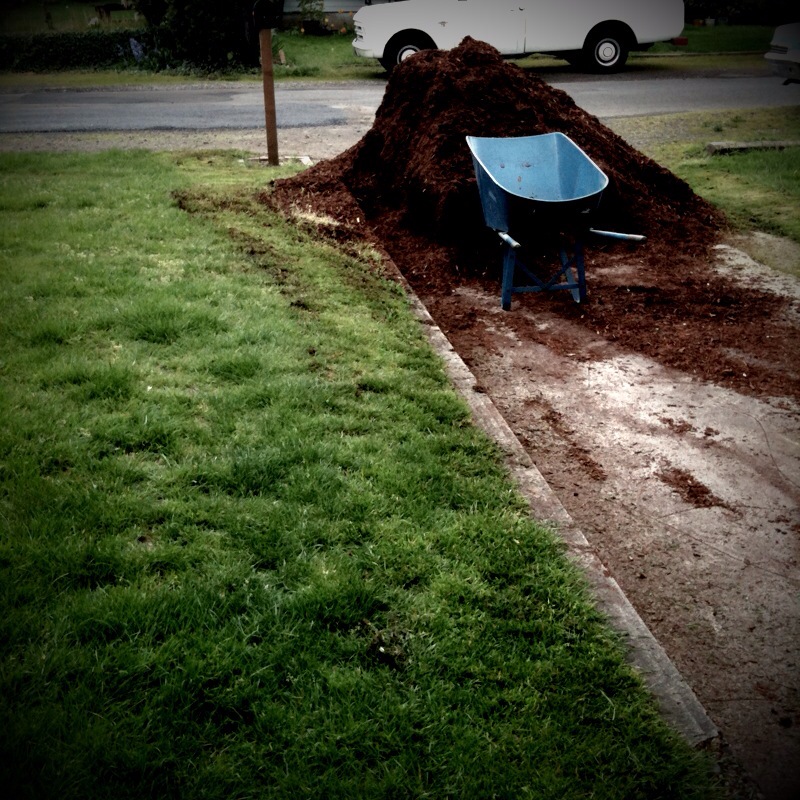 A few posts ago, I mentioned my “You’re a Puke” list.  KLZ over at Taming Insanity demanded a recital of the entire list.  So, here goes:

Such a list, compiled by just one person, can never be truly comprehensive, so I’ll need your help.  Please add your criteria for the “You’re a Puke” list in the comments.

This week’s mistakes involves being ill prepared.  I should know by now that as soon as I feel like overwhelming irritation I need to look at a calendar.  When I see that I am pre-menstrual, I need to hussle to the drug store and pick-up my wonder drug, Premsyn PMS.  I don’t know what they put in there, but it takes the crabbies away.  Instead, I put off picking some up, and spent the week feeling miserable and short tempered.

We ran an errand after work to the farm store, and Nora was dawdling and doing what toddlers do.  I forced myself to be patient, telling her to blow the baby chicks a good-bye kiss, letting her look at the goats one more time, but when I finally got her out to the car and she refused to get in the car seat I lost my cool, “Mommy doesn’t have any more patience!  You’re going to get in the car seat right now and we’re going home!”

A side effect of me being crabby and stressed out is that Nora starts acting like a total pill.  She gets defiant and wild.  Which escalates my stress.  I can’t be a good parent without patience.  And once a month, I can’t have patience without Premsyn.  I wonder if the sell it at Costco?  I need it in bulk.