You are here: Home / Archives for Family Outings

My mom drove a 1976 Buick LaSabre.  It was enormous and blue.  I sat in the front, with no seat belt.

If my mom had to make a hard stop, she threw her arm across my chest to prevent my head from slamming into the (airbag-less) dash.  This made me feel loved and protected.

Today, we strap Nora into her expensive carseat and she screams that she is not going to be our friend anymore.

But on the bus, it’s the seventies again.  Nora has freedom of movement in a motor vehicle and I get to do the mom arm trick.  I am ever vigilant.  If the bus lurches, I fling out my arm like a stop arm, saving Nora’s forehead from hard plastic seat back.

I don’t think I’ll ever completely understand why buses don’t have seatbelts — what with driver’s with an axe to grind and a less than perfect maintenace schedule.  But I guess everything dangerous was discovered in the seventies and remedied during the eighties, so I should just relax and enjoy the ride.  Except for one tense arm.

Last night, I made an enormous batch of deviled eggs, using eggs from our hens, of course.  I stood at the kitchen counter, reading tweets from the laptop and peeling eggs.  It was strangely relaxing.

Nora was stacking firewood with Ben.  Eventually, she came in to join me.  Instead of asking to help peel eggs (not one of her favorite tasks) she washed her hands for about thirty minutes, standing next to me on a kitchen chair at the sink.

The deviled eggs are delicious.  Leaning towards too rich.

I also have a very special box of cookies and a loaf of fresh bread from the farmer’s market in the pantry.

My sister and her family are coming.  My two nephews will be in my arms in a few hours.

My plan is to feed them delicious things and take them fabulous places.  If I do this right, I will give them all the gout.

A number of years ago, before Nora, Ben and I spent a stormy day at the Pacific Ocean.  It was high tide and waves were crashing all the way up the beach.  When the waves rolled out, we’d run down a hill, stack up a bunch of rocks, then run back up the hill and watch the waves knock over our pile.  Then we’d do it again.

On another trip, Ben decided we should walk all the way out to the first large rock at Cannon Beach.  We waded, fully clothed, into the ocean.  Just before reaching the rock, Ben stepped in a sinkhole and I had to yank him out and drag him a few feet back before he could get his footing.  It was just scary enough to make us giddy.  We drove back to Portland without pants, the heating vents pointed at our clammy thighs.

Just before we got married, we took a trip to Ecola State Park, scampering down an embankment too steep to walk back up.  We saw starfish in the tidepools.  The tide started to roll in and we ran down the beach to make it to a trailhead before the beach was consumed in waves.  The trail wended through a rain forest. The trees were as large as buildings and everything seemed to glow in green light.

This weekend, my daughter and my dog got a taste of that magic. 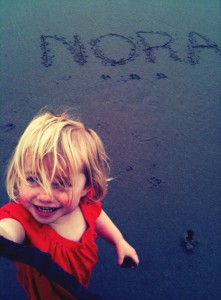 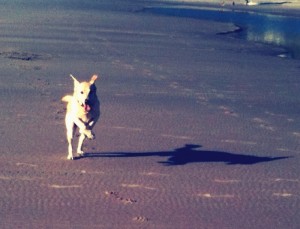 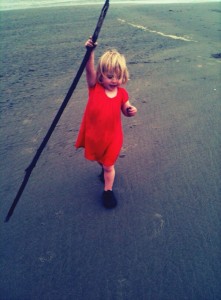 Nora recently discovered the tire swing.  She likes to spin very fast, for a very long time.  Like a drunk who insists she can drive, she demands to walk on her own after dismounting — and quickly crumples to the bark dust covered ground.

Saturday, she spied an older girl deftly navigating the monkey bars and got a gleam in her eye.  Her next challenge has been set.

In my day, playgrounds were set up on top of asphalt.  My dare devil friend and I would push the picnic tables in front of the swing sets, swing as high as we could and then jump onto the picnic tables, while our parents sat at home several blocks away.

Nora has some dare devil proclivities already.  While I’m not looking forward to the concerned calls of her friend’s parents in a few years, I do love watching her fearless little self.

I’m pretty sure our little trip back to Minnesota could be its own little book.

The novella would begin with Sue, a woman in her thirties who foolishly packs her bathing suit, despite the purple welts on her back. She has just returned from trying an alternative therapy involving glass cups, fire and suction.

She then boards a plane in a collared shirt with her enthusiatic daughter and less enthusiastic husband, and begins a sixteen hour trip, which could have been six, for a few more hundred dollars.

After deboarding, she stands in a one-deep line at the car rental counter for twenty minutes, while the twenty-year-old counter girl flirts with the customer in front of her.  Turns out, he is the producer of a dreadful reality television show.  Finally, they are summoned to the counter, where fatigue leads her to place her initials next to a dollar amount that is twice as much as the reservation estimated.

Her husband, Ben, lovely and supportive, agrees to drive the 60 miles to their final destination, despite wanting to rest in the fetal position at the nearest hotel.

An enormous thunderstorm forces them to pull over for a dinner of omelettes and pancakes.  The first of many servings of hash browns is devoured.  They listen with delight to the long vowels coming from the tables around them.  The rain stops and they press on.

Family is waiting in the driveway to greet them.  Sue marvels over her nephew, Sameer, the same age as her own daughter.  She wants to gobble him up, but it is too soon.

An infant is placed in her arms.  Tears stream down her cheeks.  She kisses her sister, who suffered much for this little bundle.

Friday brings more infant holding, toddler juggling and some grocery shopping. Sue and Ben cruise through their old grocery store crafting a meal plan for the family.  They do not run into anyone they know, it’s been ten years, after all.

Sue plays the Beatles version of Rockband and cooks with her siblings.  She holds the baby and watches her daughter throw herself into playing with fresh toys and her cousin.  Grandma reads stories.  Grandpa gives them a ride on the lawn mower.

The new parents are tired, happy and slightly feverish.

Saturday morning, Ben and Sue take the preschoolers to the park.  They run a relay race and feed the ducks.  Sameer jumps and yells while throwing whole pieces of bread.  Nora methodically tears the slices into little pieces and drops them to the ground.

More cooking, Sue makes homemade falafel and others clean up the gigantic mess.  Then, more Rockband, this time, with toddlers fighting over drumsticks.  Nora says Sameer can have a turn with the drumsticks once she goes back to Oregon.  This, despite Sameer’s generosity with the Mickey Mouse truck earlier.

In the middle of the night, Sue wakes to a little voice, “Mama?”

“You are my friend.”

In a few hours Sue wakes to an alarm going off.  Not a clock, it sounds like a smoke detector.  There’s no smell of smoke.  Sue traces the sound to the utility room but cannot find the source.  She races upstairs and wakes her father from a dead sleep, something she has not had to do in fifteen years.  A gas detector has detected the slightest whiff of CO2 from a pipe. It’s thrown into the garage and after assurances of safety, Sue returns to bed, where her family has not stirred.

Sue can’t sleep, so goes upstairs for coffee.  She takes the fussing baby for a diaper change and settles him so mom can get a few more minutes sleep.  She refills the nursing mom’s water bottle and figures out how to use the coffee maker.  She remembers the days of doing tasks the her right arm, and holding an infant with her left.

The grandparents want a family picture, the other grandparents want Nora for the day.  Ben and Nora are sent along.  A few pictures are snapped.  The rest of the family heads to brunch.  More hash browns are consumed.  Sameer sits on Sue’s lap.

Nora has taken to referring to Ben and Sue as “Ben” and “Susie” rather than mom and dad.  Later, she starts calling Ben, “Beardy.”  The three of them rejoin at Ben’s parent’s house and promptly fall asleep.  Later, there is playing outside and discussion of Nora’s brilliance and beauty.

Then it’s back to Sue’s parent’s house.  Suddenly, it’s time to pack and mentally prepare for the return trip.  Sue still longs to sit and talk with her siblings and hold the baby.

The next morning they drive to the airport, stopping for a last breakfast with Ben’s parents.  Sue is feverish and dizzy.  A few Tylenol takes it all away.  Nora sleeps in the car, meaning she will not sleep on the plane.

People on the plane are friendly and willingly change seats so Ben can sit with Sue and Nora.  Despite the relatively trouble free travel, they arrive in Portland exhausted and nauseous.  It is 95 degrees.  The car is waiting the economy lot, Ben drives home in record time.  Nora is asleep when they arrive.  The window air conditioner in the bedroom is turned on and Nora is deposited in the middle of the bed.  They will all sleep together for one more night.

I am crafting this post from a tent in my backyard. There is a monstrous mosquito clinging to the outside of the screen door. Nora is finally asleep beside me. A fire engine just went by, sirens blaring, and made the neighborhood dogs howl. She slept right through it.

Some lovely things I remember about childhood:

I am ecstatic to make these memories for Nora. Even if it means peeing in my own backyard.  If you’ll excuse me…